This story is written by Larina, Eli’s Mum.  You can read Eli’s story here.

I decided to write our breastfeeding story as an encouragement to those walking a similar path. I had breastfed two full-term babies before our third boy arrived extremely premature. I would never have foreseen how big an impact four months in the clinical and calculated environment of the Neonatal Intensive Care Unit (NICU) could rob me of my confidence to successfully breastfeed my baby. If I had not had my previous breastfeeding experience to draw from, I doubt we’d have taken home an exclusively breastfed baby. 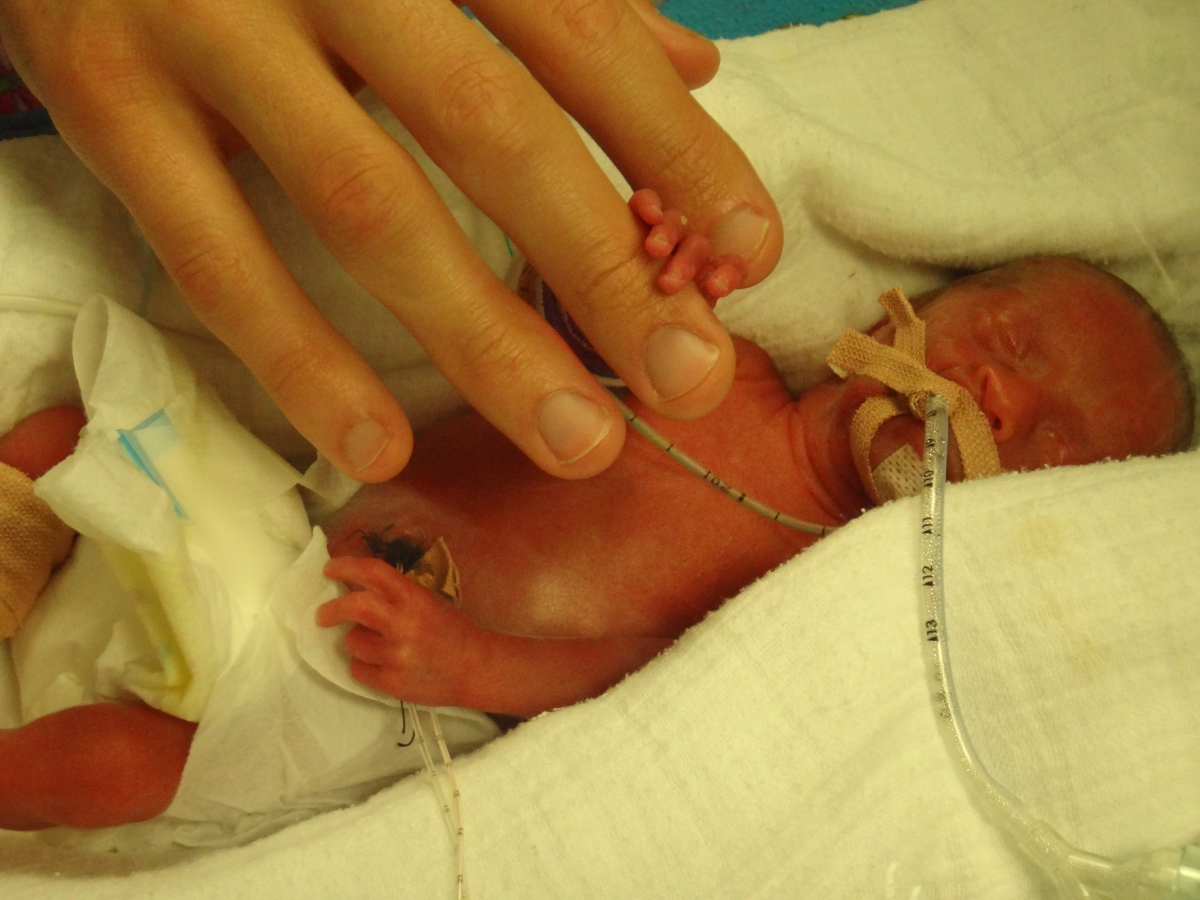 Late November 2012, our darling little boy decided to make his very abrupt and unexpected entrance into the big wide world, at a mere 24 weeks + 5 days gestation. He was birthed naturally in a grand total of 40 minutes at Palmerston North Hospital. I was in hospital for a check-up, not a delivery! We feel so blessed to have been in hospital, with my midwife, when the contractions and heavy bleeding started. Four hours later nameless baby boy and his dad were in NICU at Wellington Hospital. I joined them the next day.

So here my breastfeeding story begins: hand expressing, pumping, sterilising, measuring, recording, timekeeping – routine, routine, routine. I had left two boys behind in Palmerston North, aged almost three and almost four. Both were full-term, fully breastfed, and both honking big! I had always assumed I had a great milk supply as my older boys piled on the weight (even though they seemed to spew it all up!) We now had Baby Boy, big for his age at a whopping 890 grams (2 lbs.).

The early days were fine. Baby Boy became Elias (Eli) and milk was far from his mind. We progressed from a groundbreaking 1 ml of expressed breast milk every six hours, then 1 ml every four hours, to 1 ml every two hours and so the weeks go on. I just kept on expressing way more than he needed. A couple of weeks down the track we met up with Eli’s consultant. He tells me the three most important things we can do for our fragile boy is to breastfeed, immunise and be smoke free (not necessarily in that order). For me, easy, easy and easy… or so I thought.

My milk supply plateaued at 50 ml; sometimes it was 30 ml, sometimes 90 ml (if I’d been lazy overnight). It didn’t take long before I noticed my milk lined up in the freezer next to everyone else’s and the realisation hit that maybe I didn’t have a very good milk supply after all. This didn’t worry me at first as I was still over-supplying Eli’s need, and by this stage, I had banked up truckloads of the stuff. I even began wondering if I should donate some, as I couldn’t fathom how we’d ever get through it all!

Eli grew and eventually made it to full-feeds at 32+ weeks. Slowly but surely we started chipping away at the stockpiles of milk. At around 34 weeks we made it back to Palmerston North Hospital and we flew four full rubbish bags of frozen expressed breast milk home with us! I was so grateful to have a deep freeze at home.

We made slow progress.  At 34 weeks we had our first breastfeed off an empty breast. Slowly we built up to a full breast. But even when Eli had fed well, I could never score him a ‘10’, as I simply wasn’t making enough milk for his ‘full-feed’ (and a good portion of my milk was leaking out of the other breast). 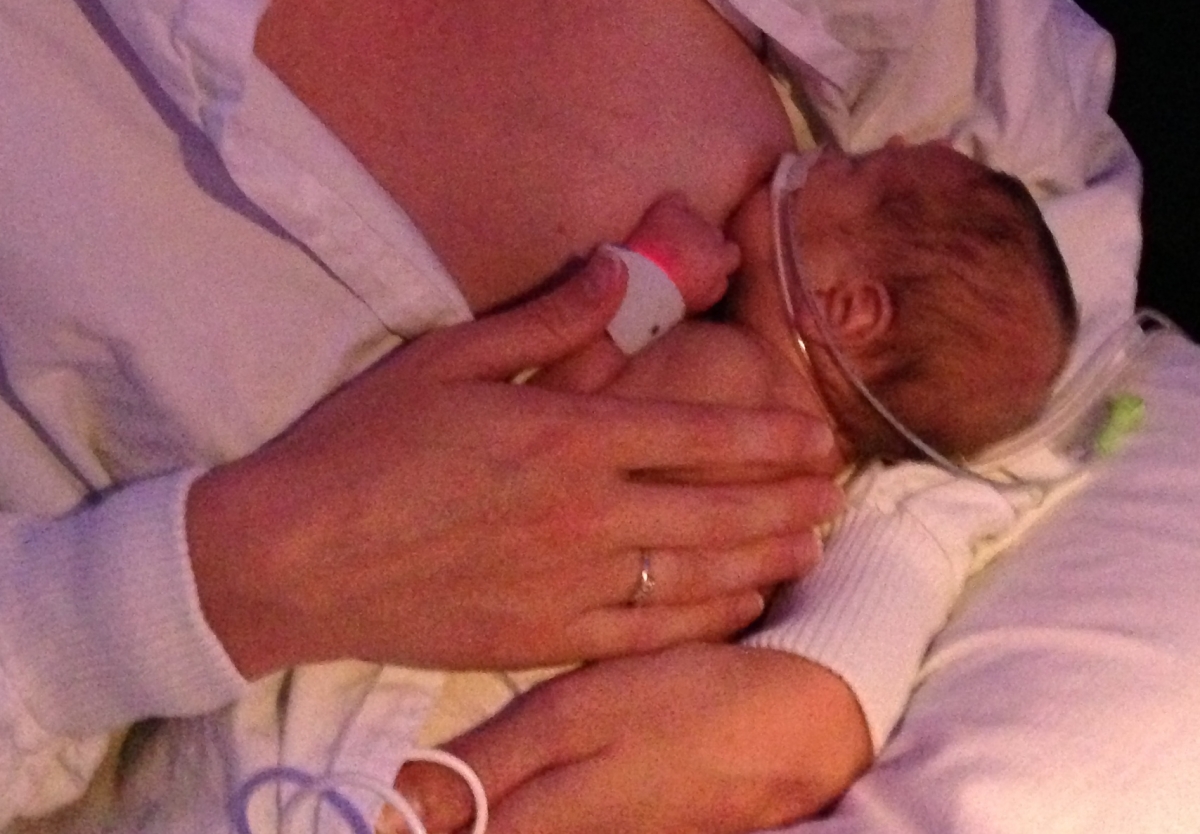 Another unfamiliar hurdle was him sleeping through his ‘feeding schedule’. Eli fed well when he was naturally awake but when I had to wake him he was hopeless. There’s nothing quite like driving into the hospital for the fourth time that day to spend 30 minutes trying to feed a baby that wouldn’t wake up, and then resorting to a tube feed and a 20 minute expressing routine! I talked to the nurses and we agreed to try him out on 4 hourly feeds to give him a chance to wake up naturally for it. This was a great move and feeding became a lot more rewarding. That said, my 50 ml milk supply became even bleaker next to his new full-feed of 93 ml!

The time had come to proactively boost my milk supply. I started expressing two hourly. Express I did, build my supply I didn’t – much. I even doused my food with turmeric and started eating oatmeal. I decided to try Domperidone with the aim to get closer to his full-feed, as I really wanted to demand-feed him like I did the others. Domperidone got me to 70 ml but I was still 20+ ml short of his full-feed.

With support from the nurses, my lazy streak wanting to lose that dreaded breast pump, and my past success with breastfeeding, we began to drop the top-ups after a ‘good’ feed. By around his term date he was demand-feeding three to four hourly during the day and bottle-feeding at night.

Home day is scheduled. So the proof is in the pudding right? I spent two nights staying over at the hospital, demand-feeding day and night. Eli scraped through with minimal weight gains but that was good enough. I took him home 123 days later a demand-fed baby. I humbly carried my eight remaining bottles of frozen breast milk home with me – I couldn’t believe we needed virtually every last bottle…

The weeks that followed were liberating. I quickly lost hope in having a baby on a 4 hourly feeding schedule (my other boys fed two hourly for months) but was very happy with Eli’s 2 ½ – 3 ½ hourly feeds. I ran out of Domperidone and didn’t get around to replacing it. I fretfully awaited the weekly weigh-in and was relieved to see a gain of 60 grams.  Not ideal but ok.  The following week, after missing the longer night sleeps, I asked my husband to get a more substantial feed of 100 ml frozen breast milk ready in a bottle. I expressed the next bottle’s worth of milk, 3 hours after Eli’s last feed. To my astonishment I returned 100 ml of freshly expressed milk to the fridge. No Domperidone influence, just our baby and me. This was a new record for me and it was exactly the amount our baby needed!

At five months old (six weeks corrected) Eli was a demand-fed baby. He was gaining a respectable 160-180 grams a week. His feeds varied between one to four hourly intervals. I had packed away my breast pump but knew where to go when I wanted a break. We had a tin of formula in the pantry and weren’t afraid to use it. Despite all indications that I didn’t have enough milk to feed my baby, actually, given the chance, I did!

Eli was fully breastfed (alongside solids) until around his first birthday when we started introducing a night time bottle. The bottle was easy food, and as he fed less from me, my milk supply dwindled and became harder work for him. By 17 months (14 months corrected) he’d completely transitioned to cow’s milk. At two years old (actual age) he measured above the 50th percentile for weight and height! I am so thankful that we took the plunge and stopped counting the millilitres and minutes, and instead listened and responded to our baby’s cues.

Every baby is different and every mother is different. My experience may be quite different to your experience; but try to remember that you have been flung into an incredibly artificial and stressful environment. Nowhere else would you be rounding a feed up to the nearest millilitre based on your baby’s daily weight in grams! You would have fed your baby when he was hungry, given in to his inconvenient cluster-feeds and shed a fair number of tears. You would have stumbled through breastfeeding with many trials and you may or may not have continued.

Above all else, marvel on the miracle that is your baby.