When Declan Colquhoun was born, his aunt’s wedding ring would have fitted around his arm.

He and twin brother Riley were born at just 23 weeks and one day on March 3. It’s considered the edge of viability – babies born earlier are not usually resuscitated.

Declan weighed just 400g – a photo of him next to a pen shows just how tiny that is – while Riley was 530g. 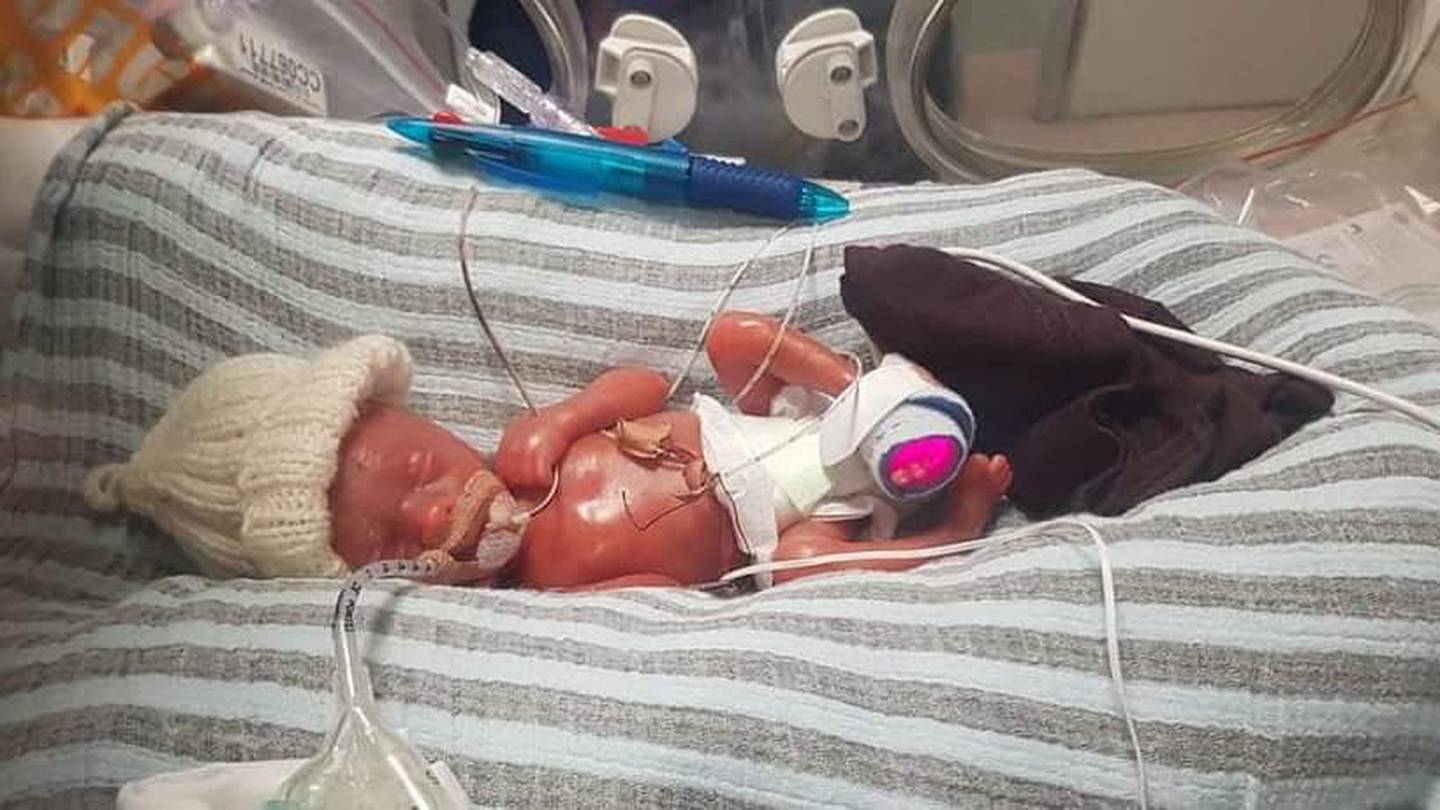 Just over two weeks later, Riley lost his fight for life, while eight months on, Declan has this week moved out of Wellington Hospital’s neonatal intensive care unit and is getting stronger every day. He now weighs 7kg.

At 22 weeks pregnant, the twins’ mother Kathryn Hutchinson, 23, discovered she had high blood pressure while at a midwife appointment. She was diagnosed with preeclampsia, a condition affecting pregnant women, and doctors decided it was safer for her to have the babies.

They were delivered via caesarean. Their eyes still fused shut, they were put straight on ventilators, with Hutchinson and her partner Chris Colquhoun not able to hold their baby boys.

Colquhoun soon had to return to his job in traffic management.

“The reality is life goes on. Bills don’t go on hold.”

On March 17, the Upper Hutt couple got a call that Declan was battling for his life. They rushed to the hospital for cuddles – their first since he was born – preparing for the worst. But he battled through and it was Riley whose kidneys started failing the next day.

“In the early hours of March 19, his little body decided enough was enough and he grew his wings,” Hutchinson said.

The couple had a small funeral service for their 16-day-old son, days before the country went into lockdown.

Then at three weeks old, Declan opened his eyes for the first time. But things got harder. Only mothers were allowed to visit their babies in the unit due to the Covid-19 risk so Colquhoun would take Hutchinson to the hospital and wait outside in the carpark. He didn’t see Declan for six weeks.

“It was horrible,” Hutchinson said. “He’d only just lost his son and his other son was fighting for his life and he couldn’t be there.”

Declan’s recovery has been a slow process. He had three surgical procedures within a week.  “He was extremely fragile.”  Hutchinson would spend all day at his bedside and returned at night with Colquhoun after he finished work.

But about a month ago Declan was well enough to go outside for the first time in his life. His parents took him for walks around the hospital grounds.  And this week, he was transferred out of intensive care to a special care baby unit at Hutt Hospital but still requires oxygen and a tube to feed.

“It’s a step in the right direction,” Hutchinson says.

The couple also have a wedding to look forward to when Declan is well enough – Colquhoun proposed in September.

Declan is defying the odds.

The number of babies who were part of a set of twins who survived at such an early stage would also be extremely rare.

President of the Paediatric Society, Nicola Austin said that last year a working group reached a consensus to resuscitate babies born from 23 weeks gestation, with preparation from 22 weeks and five days. The threshold at some hospitals had been 24 weeks.

The use of corticosteroids in mothers in preterm labour (which was developed in New Zealand and is used globally) and less aggressive lung ventilation are among recent medical advancements that mean babies born that early can be saved.

Hutchinson has been supported by the Little Miracles Trust which provides things like care packs, supermarket and petrol vouchers and organises family catch-ups with speakers.

Friend’s 7-year-old son Reuben was born at 24 weeks, which at the time was “very much considered the line of viability”.

He was 665g and could have fitted in the palm of her hand if she had been allowed to hold him but his skin “was like paper”.

“You wouldn’t know anything was wrong. He’s reading above his age level, he plays football, he swims, he wants to play basketball next year, he loves his mountain biking.”