I thought it was about time I shared my experience with pregnancy and child birth in its entirety. I figure getting it out there in the world will serve as some sort of cathartic cleansing, and also to raise awareness of a rare condition that robs you of the joy of pregnancy.

I found out I was pregnant in late May 2018, about 3 weeks into it. The reason I found out so early is because my husband Sam and I were so excited at the prospect of becoming parents I had been taking pregnancy tests every day for a week in the hope we would see those two pink lines. And sure enough, we did. We were thrilled. We were so ready to start our parenting journey. 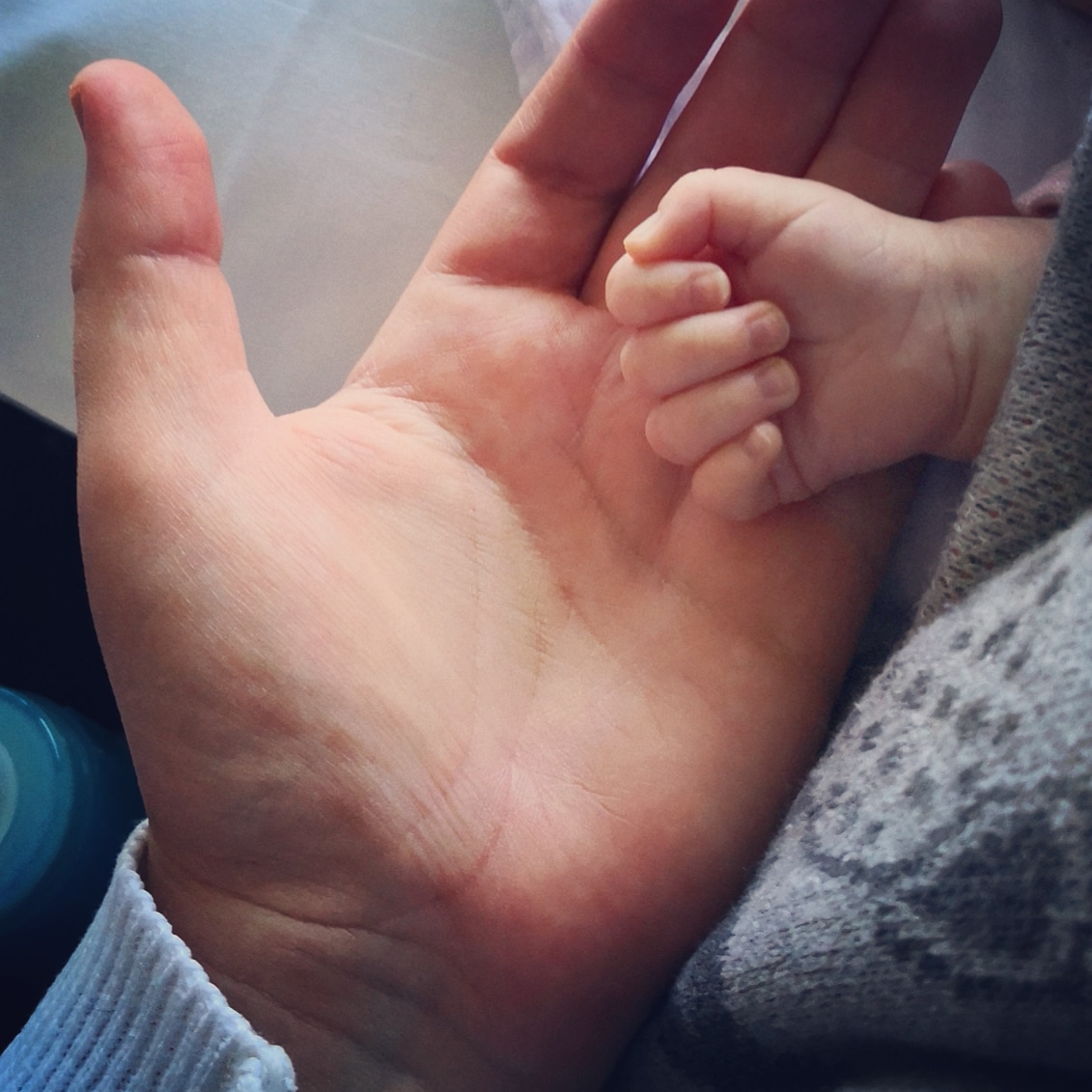 Between week 3 and week 5 the sickness took hold. I knew I was going to be very unwell due to a few reasons, but I had no idea the scale in which my life would be threatened by a condition known as Hyperemesis Gravidarum, or HG. Hyper = excessive, emesis = vomiting, gravidarum = of pregnancy. Many people may think this equates to bad morning sickness, but that couldn’t be further from the truth. HG caused me to vomit anywhere from 20 to 60 times per day. I had vomit bowls in every room of the house. I was so weak from malnutrition and electrolyte imbalances I couldn’t get out of bed or off the bathroom floor, and Sam would often come home from work to find me in a very dangerous state, and would rush me off to hospital for rehydration. The hospital stays got longer and longer. They went from a couple of days, to 5 weeks by the end. I stopped work in week 5, there was no way I could get out of bed let alone attend work. This meant after all my leave ran up, we were down $800 a week in income. I was taking roughly 30 pills a day, which included chemo-grade anti-emetics, which did absolutely nothing to tame my illness.

HG not only causes excessive vomiting, it also messes with your electrolytes in a really bad way. At one point, my potassium levels were so low they were worried I was going to have a heart attack. I also tore my oesophagus 3 times, and I was vomiting so much that I needed to be fed intravenously with a treatment known as Total Parenteral Nutrition, or TPN. At one point they were pushing for me to have a nasogastric tube, but I declined as I was terrified of the procedure. I needed to have a peripherally inserted central catheter, or PICC line, inserted into my arm because my veins were severely damaged from all the cannula and potassium I had.  This also enabled the medical staff to administer the TPN. A PICC line is a semi-permanent IV line that goes from your upper arm to the Superior Vena Cava in your heart.

People offer you all sorts of well-meaning advice. It starts to get on your nerves after a while. I was told to try ginger, crackers, juice, and even told I just needed to get more sunshine. I got messages from people telling me I should “treasure every moment” as some people couldn’t have kids of their own. Those were super helpful messages when all that’s going through your head is that if you died or miscarried, at least the pain would be over. HG robs you of your joy, your sanity and 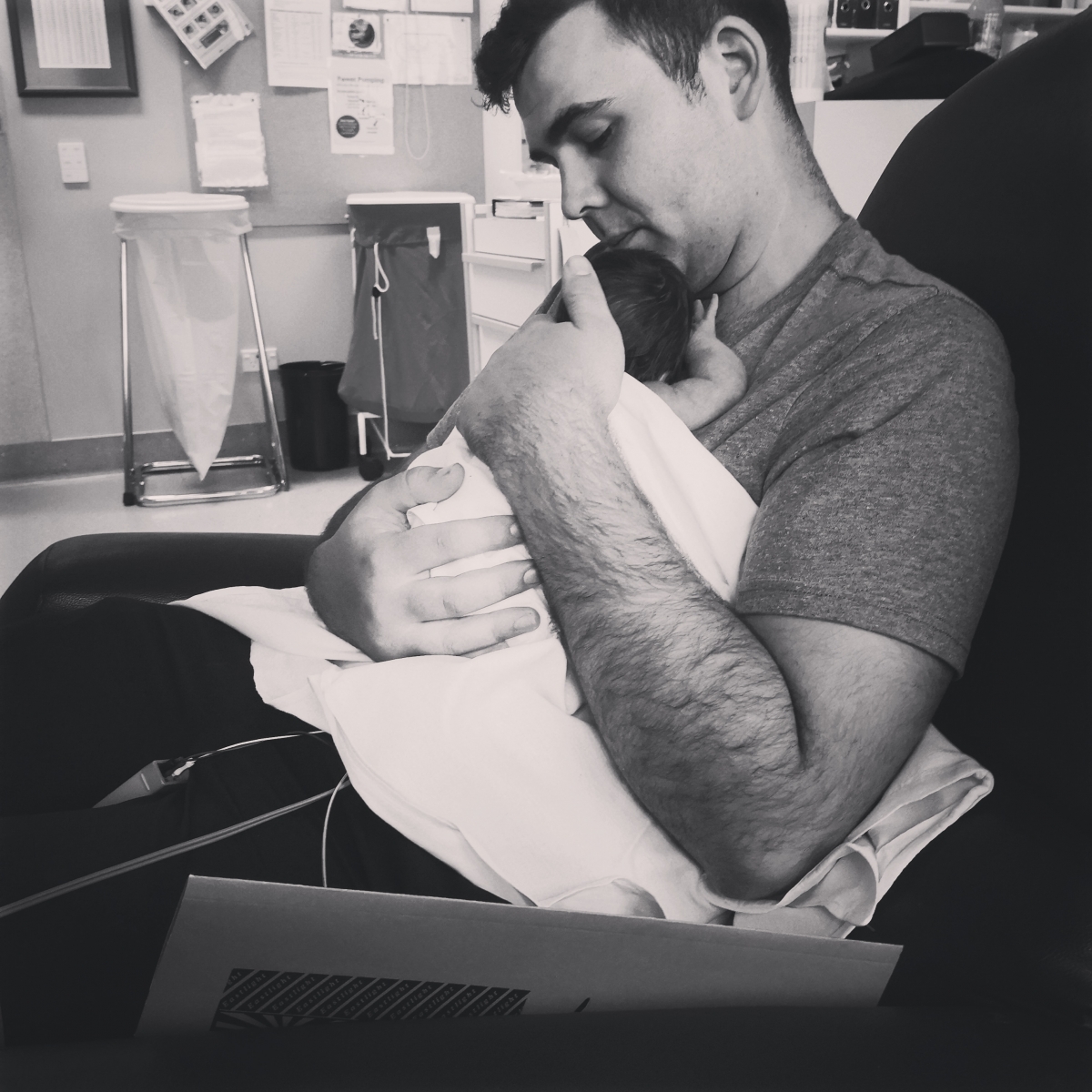 your ability to bond with your child. It makes you suicidal, and it makes you consider terminating a very wanted pregnancy.

The doctors started off super positive. They told me to just hang in there and after the first trimester it would be gone and I’d be ok. That came and went and I was still sick, actually worse. They said to hang on until 20 weeks, surely then it would be gone. 20 weeks came and went, but the sickness got worse. After a while they admitted that it probably won’t go away and that they were out of ideas of how to treat it, as they’d never seen someone with it this bad.

Sam was an absolute hero throughout all of this. He not only worked full time, but he made sure that I was still alive at the end of the day, and did all of our housework. He went from knowing very little about pregnancy and not spending much time in a hospital, to becoming somewhat of an HG expert and patient advocate. But all this took its toll on him. He lived in constant fear that something was going to happen to me or his unborn child. No person, no matter how strong, can tolerate that kind of stress onslaught.

One day, I started to notice issues with my PICC line, it was painful and swollen. I reported it to both my doctor and the community nursing staff that were overseeing the care of it. Nobody seemed all that bothered and I started to wonder if I was overreacting. Then late one night a few days later, things took a very bad turn. My vomiting was coming on every 5 minutes. I was having hot and cold sweats, and was hallucinating. Sam rushed me to the emergency department, and they confirmed that my PICC line was infected. They still didn’t seem all that worried, and sent me up to birthing suite to be rehydrated, which is standard practice for HG after 25 weeks. Once I was up there, things got even worse. I was shaking uncontrollably and drifting in and out of consciousness. The test results came back that I had septicaemia, and it had reached my heart due to the PICC line. I was sent to intensive care for quite possibly the most frightening night of my life. I spent a total of 2 weeks being carpet bombed with antibiotics, and I was very fortunate that it was caught in time.

After 2 weeks, I was released back home, but only lasted 12 hours before being readmitted for HG. After about a week in hospital, I was approached by the OB, and he told me that I had severe preeclampsia and my baby would need to be delivered as soon as 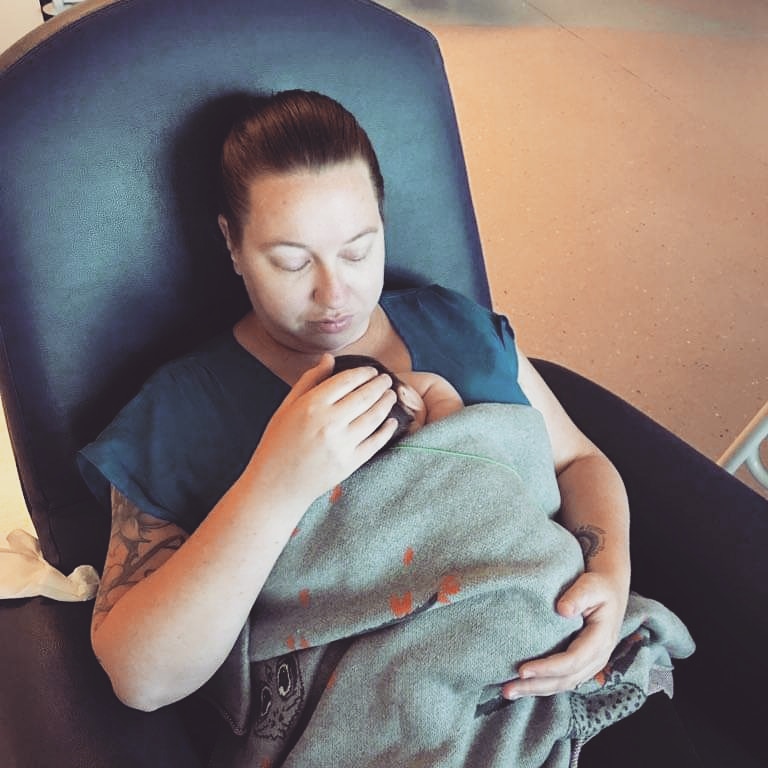 possible. He also informed me that there was no room for us in the Christchurch NICU, so we were being flown to Dunedin within the hour. Sam rushed home, grabbed some clothes, and dropped the dog off at our friends’ place, and we were flown out at 7pm that night.

Two days later, on the 4th December 2018, we welcomed Alina Mae Joy Daly into the world via C-section at 30 weeks gestation, weighing 2.24kgs (4.9 pounds). We were very fortunate that she was a good weight.  I didn’t get to see or hold her for 12 hours, and the first time I laid eyes on her, I couldn’t even see her face as she was on a CPAP machine. It was heart-breaking. But she was a tough girl and handled it all like the warrior she is. The HG went away the minute she was born, but I was mentally and physically ruined. I was traumatised, and scared. And I felt like I was a thousand miles away from home.

I had always planned on breastfeeding Alina, and when a baby is premature, the benefits of breast feeding on their developing bodies is second to none. However, Alina was too premature to feed straight away and was being fed through a nasogastric tube. Her brain was too immature to know how to feed from the breast or the bottle. This skill wouldn’t develop for another 6-10 weeks. This meant that I had to be hooked up to a pump every 3 hours. But for some reason the milk would not come. I had assistance from a lactation consultant as well as several midwives, but nothing was happening. They said this is common with premature babies, the milk just “takes a while”. But it never arrived. After about 4 weeks, it was completely gone. They had run out of donor milk, and the neonatal doctors told me it was time to shift to formula. It was hard enough to be robbed of the ability to carry your child to term and give birth like everyone else. But then I was robbed of the ability to feed my baby the way I had wanted to and planned.

We spent a total of 11 days in critical care in Dunedin, before being airlifted back to Christchurch on the 15th December. Alina was a feeder grower, and had to learn to eat. She also had apnoea, and would sometimes stop breathing for a short time, which caused her heart rate to drop.

It took a total of 57 days for her to start bottle feeding, and after a total of 67 days in hospital, Alina was discharged home on the 9th February 2019, 3 days after her due date. She is now a happy and healthy 11month old girl, who is thriving despite all the barriers that life has thrown at her. She is my little wahine toa. 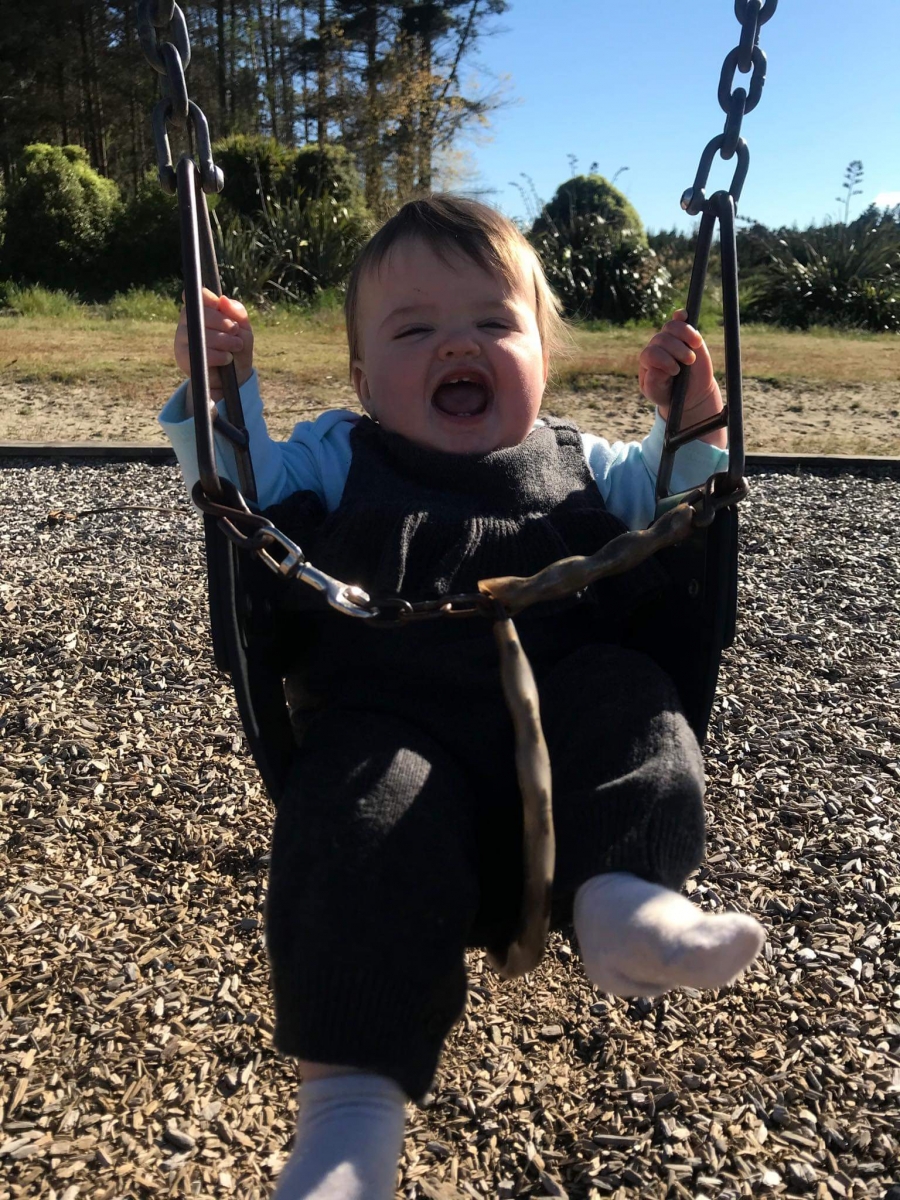 As for me, I needed weeks of counselling to get over the trauma I experienced from my pregnancy and birth. I’m still working on it. It will be a long time before I am ok with it. But I am strong, just like my daughter. This also means no more children naturally for me, but we have other options. It’s just not the way I wanted it to go, but if there’s one thing I’ve learnt in life it’s that nothing is guaranteed and you need to roll with the punches.

We are so grateful to the teams of doctors and nurses, social workers, health care assistants, and other NICU parents that we met on our journey – our girl wouldn’t be where she is now without them all.

Thank you for hearing our story.

Any woman who has had nausea and vomiting in pregnancy (often called morning sickness) will tell you it is a miserable feeling. For some women, the symptoms are so severe or last so long that they are unable to keep down enough food and fluids to nourish themselves. This is known as hyperemesis gravidarum.

For most women, pregnancy nausea is limited to the first three months (or first trimester) of pregnancy. It eases off at around 12–14 weeks as the placenta becomes established and the pregnancy hormones such as hCG (human chorionic gonadotrophin) level off. With hyperemesis, symptoms can start earlier, around 6 weeks, and are much more severe than normal morning sickness. Some women report being sick up to 50 times a day. On average, symptoms of hyperemesis improve around week 20 but can last until birth and it can have a huge impact on your life at a time you were expecting to be enjoying pregnancy and the birth of your baby.

More information can be found here