In this month, I'm thankful for……

As told by neonatal mum, Bryony

I told my midwife I was cramping. I was 24 weeks pregnant with my second baby, with my first I had gone into labour at 31 weeks. We went to the hospital and saw the Doctors. I told them I knew, like a mother knows that, something wasn’t right, but they sent me home. Then I began to bleed. Then my waters broke. I was 4cm dilated.

In New Zealand, approximately 10% of all babies are born premature, that’s one premature baby born every 90 minutes.  There are also full-term babies whose condition or illness requires admission to a Neonatal Intensive Care Unit (NICU) or Special Care Baby Unit (SCBU) after they are born.  In all, over 5,000 babies have a difficult to start life in New Zealand each year. Neonatal November is dedicated to the parents who face unimaginable challenges at the beginning of their new baby’s lives. It is dedicated to the parents who spend their whole pregnancies preparing to bring their babies home from the hospital and then they don’t. Some never do.

In this month, I’m thankful for a midwife who listened. She sent me back and helped me to advocate for my need to stay in hospital until my baby came. Nine days after my waters broke, my baby boy, all 1.1kg of him came screaming into the world only 45 minutes after being brought into the delivery suite (only 30 minutes after my husband arrived from being in town with the boys, but that’s another story…). Five minutes after delivering the placenta, I was up standing at the incubator watching the doctors breathe life into him. He was wrapped in plastic and as soon as they could he was whisked away. I waited the mandatory two hours in delivery suite, having a shower and eating the jam on toast my angel of a midwife brought to me, but it felt surreal. Eventually when we went to see him the Doctors were busy performing procedures, we lingered for a while but he was covered by drapes and we were intruding on their sterile field, so we left.

In this month, I’m thankful for Neonatal nurses with gentle hands and hearts. Two days after he was born, I was discharged from the hospital. The next day we drove back in at 9am and I sat by his side. It was hard to speak to him, he still had no name, I didn’t know if he could hear and he hadn’t opened his eyes yet. By a chorus of bells and bings, nurses danced between four incubators.  They gently repositioned their little bodies and all the things attached to them. They turned dials up and down, gave tiny volumes of medicine and spoke gently to them when they cried. Every afternoon I would undress my top half and they would carefully tuck him up against my chest like a kangaroo cub in a pouch. We would talk to pass the time, at first about his progress and what the results meant, and later about our lives. We talked about how people say “Oh but he’s tiny and cute!” or “At least you get to sleep at night!” and we called them rude names until we both felt better. At 5pm I packed up my things and went home knowing they would take good care of him. At 9am I arrived and we did it all again. And again. And again.

In this month, I’m thankful for Doctors with calculators for brains. Every few days my son would be weighed. At the ward rounds they’d discuss his new weight and calculate the new doses accordingly. They would calculate how old he was getting, and whether heneeded an eye exam, or brain scan, or any number of other tests conducted by big machines that outshone their tiny bodies. They would carefully calculate how to speak to us about results, and what speedbumps were to come, and what the future held for our little soul.

In this month I’m thankful for Lactation consultants. In the beginning it felt as if there was nothing I could do for my baby, that I was a guest. A guest who expressed. And so began the three-hourly routine of pumping milk for my baby, which would continue for months on end. This was one thing I could do. It got to the point where my boobs could tell the time better than I could! The LC’s would come around and suggest things to help my baby feed, so that one day he’d be able to feed from me. And when I had more milk than I needed, they helped me to donate it back to the unit for other babies whose mothers had been affected by stress and illness and couldn’t easily make milk for their babies. Eventually my son became interested in the breast and fed, and all the hours and hard work I had put in until that point suddenly seemed worth it, despite nearly giving up many times.

In this month I’m thankful for cleaners and health care assistants who asked me if I was okay when I cried into my cereal in the parent’s room. Who meticulously cleaned my baby’s incubator, the floor, the door handles, anywhere that could harbour a germ that could make our baby seriously ill, or worse. Who cleaned the milk I spilt on the floor when the bottle overflowed as I watched my son’s heart rate and oxygen saturations suddenly drop. Who helped me fetch a bottle of precious expressed milk that rolled under the freezer.

In this month I’m thankful for other NICU parents. For those who spoke to me, and to those who listened, as we shared our new language of triumphs about coming off biphasic, gaining weight and tube feeding, bilirubin and CRP levels coming down. We commiserated over when our babies would get their first bath, or to wear a piece of clothing. We kept each other sane, we held each other when we cried. We counted the days together, and celebrated when we went home with our babies.

In this month, I’m thankful for everyone who sees our pain as NICU parents. Who send meals, fruit or baking, and knit tiny clothes and booties. After 80 days, we were preparing to leave and I walked with him back into the room he had first been. I don’t think it hit me until then that if it wasn’t for them, for all of them, that he may not have been here. Every day had been spent pushing forward, over and over again, measuring his progress. It occurred to me in that moment that all of these people help you to look forward, because looking back hurts too much.

In this month I’m incredibly thankful for my family and friends. I know without their support, visits, coffee deliveries and babysitting that I wouldn’t have been strong enough to grow our son. They built me up so that I could be there for him, and I don’t know how

I’ll ever repay them. Thank you for respecting my absences, my forgetfulness, and thank you for letting me ask so much of you. It absolutely takes a village, especially for a NICU family.

Three months after giving birth, I came home with a newborn.
Three kilograms of healthy, happy baby (and his four kilogram oxygen bottle…).
Three months of sleep deprivation up my sleeve.

And our family of three,

*** Thanks for sharing your story Bryony *** 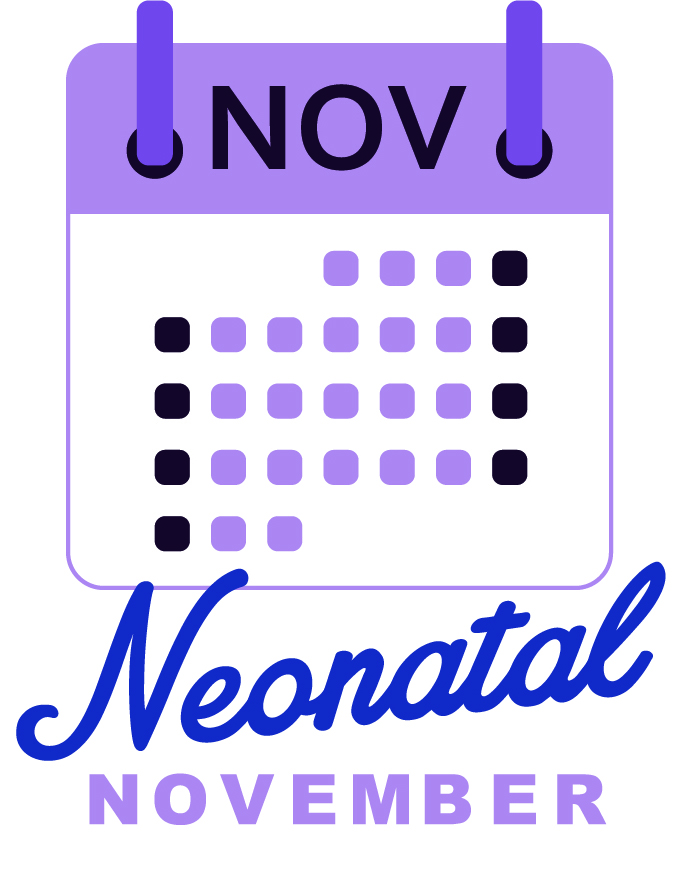 In 2017 we softly launched ‘Neonatal November’.  One of the key drivers for this was to have a wider period of time to raise awarness of neonatal journeys.

In addition, we were conscious that there are many full-term neonatal journeys each year (ie the full-term babies with health issues and/or complications) and we wanted to widen beyond World Prematurity Day on November 17th.  All babies needing an extra hand are cared for by the caring, patient and kind staff in the Neonatal Intensive Care Units (NICUs) and Special Care Baby Units (SCBUs).