As told by mum Te Kira

I had a good pregnancy which was mostly spent overseas in Singapore where we were living at the time. I flew back to Hawke’s Bay at 36 weeks pregnant and went into labour at 42 weeks.   9.5 hours later Mischa was born via ventouse delivery, she had shoulder dystocia and meconium aspiration and it was pretty scary going through the steps taken to deliver her safely.

Mischa was born at 6.49am on a Friday. All I saw was the back of her head before she was whisked away. She wasn’t crying and her apgar score was low. I simply couldn’t look over in her direction and then just as she left the room, I heard her cry.  They took her straight to the Special Care Baby Unit at Hawkes Bay Hosptial. 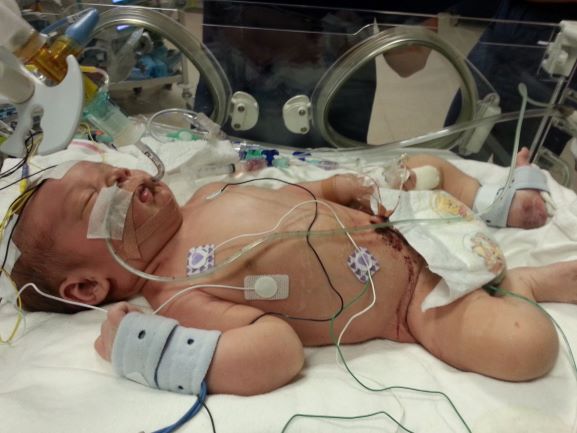 I was told she was working hard and having difficulty breathing. The staff kept us updated until we were finally able to see her. It felt weird not knowing what my baby looked like. I don’t know if it was my way of coping or if I was in shock from what had happened but I was surprisingly calm and collected – nothing they said seemed to phase me.

When we were eventually able to see Mischa, she was intubated and the medical team were still working on her. She had other things happening such as seizures and internal bleeding of which sepsis was suspected. Even if she had swallowed meconium, her body should not have been reacting this way.

I remember the pediatrician and nurse manager coming to talk to me about exactly what was going on with my baby and it was then that I finally realised just how serious things were. The Wellington NICU team were flying up on the Life Flight plane to take her to the Wellington Neonatal Intensive Care Unit and we would follow in the Hawke’s Bay air ambulance.

My husband had already left to pack a suitcase and I decided I wouldn’t tell him the news until we reached Wellington as I didn’t want to upset him in the same way I had felt so devastated myself.  Before I left Hawke’s Bay Hospital, I was allowed to see her for a second time and she appeared to be stable.

By the time we arrived in Wellington and was admitted, the consultant came to see us. My daughter was on the flight but she was challenging the medical team and I was told they were unsure if she would survive the flight. I broke down and all I could think of was that I had carried my baby all this time and had only met her twice – how could I lose her?   Suddenly, for some unknown reason, deep down in my stomach, it felt like it was going to be ok and that we weren’t going to lose her – I don’t know why but it just didn’t feel like this was going to be it.

Surprisingly, I slept well that night, although I guess by then I had been awake for around 36 hours! We were told if anything changed in the night we would be woken, so in the morning I was rather excited to see that we hadn’t received a call and that she had been ok and stable throughout the night.

They carried out many, many tests and gave her a universal antibiotic as they thought she was fighting an infection of some sort. Whilst x-raying her chest they discovered a possible blockage in her stomach and when she was off the 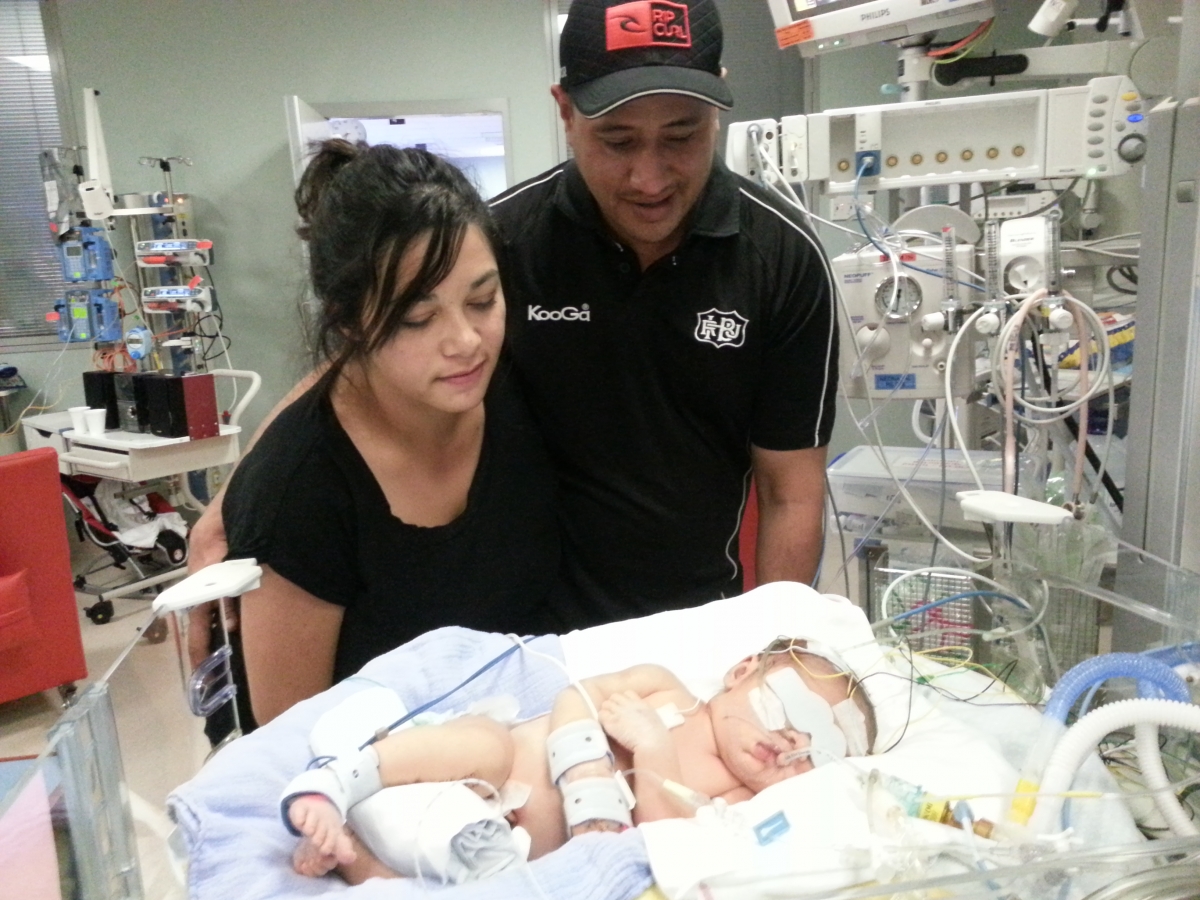 breathing tube, they did a fluoroscopy and booked her in for surgery at 6 days old. I had my very first hold and cuddle with her before she went in.

Mischa had a narrowing in her duodenum and the surgeon put a bypass in her bowel. They opened her up again almost two weeks later as the expressed milk we were giving her (maximum reached was 20ml by syringe) was not being digested.  As suspected, the surgeon discovered she had a rare obstruction in her stomach – a thin membrane that went across with only a small hole known as “webbing”.

Things were going well and I thought home time was going to be near. The team at NICU were awesome – before my husband left to go back to work overseas, they arranged for us to push her around in the pram. It was only around the unit and her machines were packed in the pram with her but it meant so much to do something so normal with her. I then progressed to being allowed to take her across to my room for a wee while. It felt so good having my baby all to myself!

Mischa progressed to full feeds and my frozen expressed milk stocks soon dwindled. I gave breastfeeding a go at this stage but this didn’t work out for us and was happy to continue expressing.

One day I noticed change in her toileting and after blood tests and an ultrasound, it was found her bile duct was dilated which meant another procedure. This time there was no surgery date set. It would need to be studied before proceeding. It was all too much for me by then – I had my hopes up that we would go home and we’d had another setback.

I prayed and hoped so much and one week later they performed another ultrasound as things finally began to normalise. Her bile duct was strangely normal, which I was told it was unusual for it to change so much in that time, but 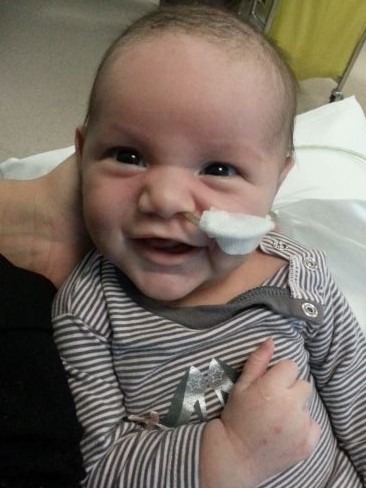 everything else that had happened to Mischa was not textbook and neither was this.

I cried when they said we could finally return to Hawke’s Bay – it had been two months by then. I was sad to leave our little home-away-from-home in Wellington. When flying back to Hawke’s Bay I felt emotional – when I had initially gone there, I had my husband and my baby wasn’t with us. This time our baby was on the plane with me but my husband was unable to be there to share that moment with us. I waited a month before we flew back overseas to be reunited as a family again with my husband just to be sure no more health issues came up.

The staff at Wellington NICU were amazing – if only they knew how this special place was to me, and it continues to be in my heart every day, there are so many fond memories of them all. They helped me to become a confident Mum ready to go home. The team at Hawke’s Bay Hospital were equally fantastic – they did so well caring for my daughter in those first hours and we spent one last night there upon our return before I had officially graduated to taking our girl home with me.

Time has flown and Mischa is due to start school next year.  We never did know why she was so critically ill but it was possibly due to the unknown problems with her stomach and small intestine, her body simply couldn’t cope when she ingested the meconium. The midwife did say she felt someone must have been watching over us that morning because despite the traumatic delivery, it put us in the right place in the hospital and the issues she had were discovered straight away. Had she had a normal delivery experience we would not have known there was anything wrong internally.  It turned out, it was a real blessing in disguise.

I don’t see our experience in a negative way. Our journey wasn’t what we had planned but was a good reminder that instead of our usual worries about what cot or pram we were going to choose, all that really mattered was how lucky we were to have our baby alive and with us. 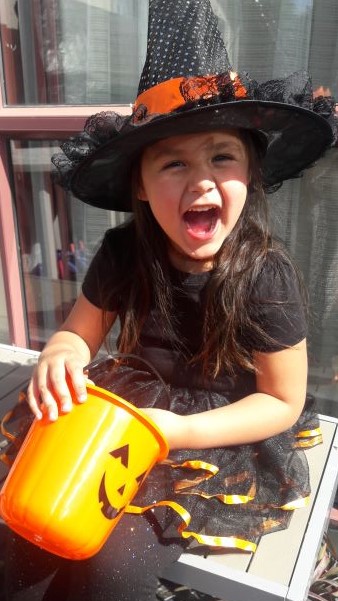