Tuesday 27th May 2014 is a date indelibly etched on our memories.  A day we had strived towards; struggled towards; prayed for and received and sent all other forms of healing and hope possible.  We were not proud – all help accepted! 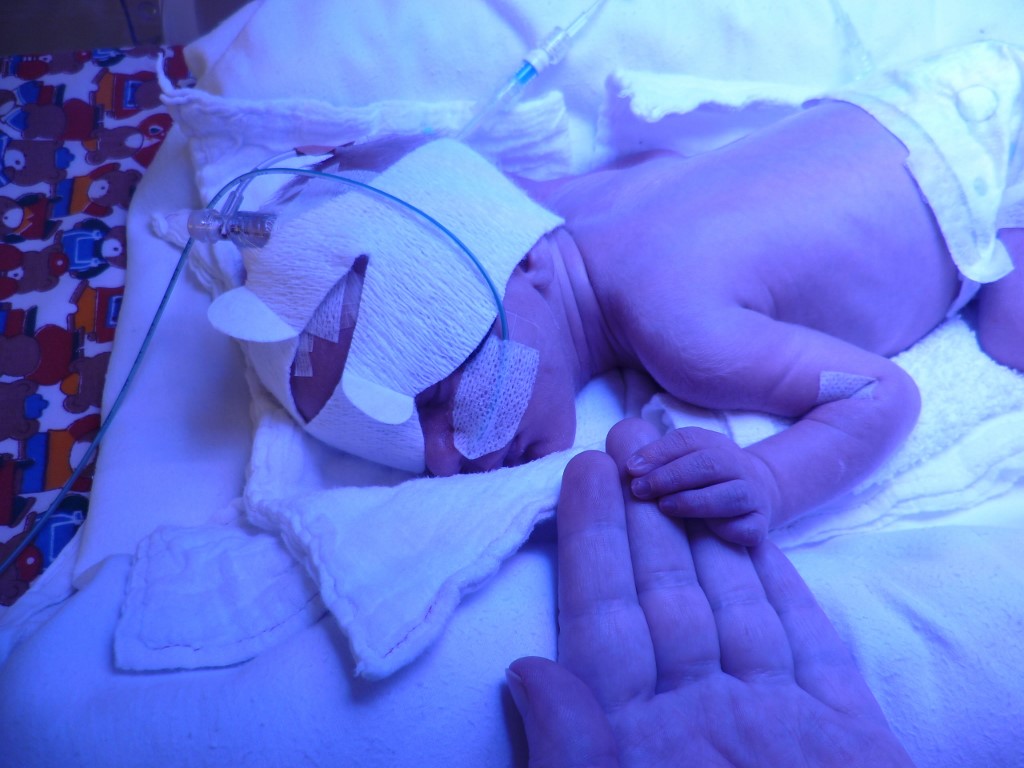 At 9:13am our 33week+2 day son was delivered by a team of obstetricians, gynaecologists and midwives and whisked off to the NICU.  Weighing in at 2.130kg he was taken to Room One and put into his incubator. Almost 12 hours later I was wheel chaired up from the Gynae ward to meet my son for the first time.  I uttered the immortal words, ‘I’m here to see my son but I don’t know which one he is’.

Our journey to this point was one that neither of us had expected to have to take.  As older first time parents we knew that conceiving may not be the easiest thing.  Almost two years after deciding to take that step, and after numerous tests; prodding; poking; medication and with the decision made that IVF may be the only way forward and a date to attend our first consultation we found out that I was pregnant.

It was a Sunday.  Another moment I will not forget in a journey that would provide us with lots of other moments that we were not expecting and would not forget.  That week we went to the Doctors and had the pregnancy confirmed.  There was a locum Doctor and for some reason – I have no idea why – they decided to do a cervical smear.  I was not overdue for a smear.

The next few weeks passed by in a blur… my husband and I were called back to the Doctors where we were told that abnormal cells had been detected and given the situation I needed to have an urgent colposcopy.  This also marked the beginning of our very rapid rise of knowledge around all things gynaecological.

The following week, having had a terrible night and suffering with dreadful nausea I decided that I couldn’t face a day in the classroom (I am a primary school teacher) so took the day off work – as I slumbered through the morning with just a bucket for company (just in case) the phones began ringing and ringing and ringing.  I shall never forget the words… ‘This is …. from Christchurch Women’s Hospital, I just wanted to check that you are coming for your appointment on Wednesday.’  I was floored – what appointment?  What for? Who with? What is going on? We live very rurally and the appointment letter had not arrived. Hasty arrangements were made and two days later we found ourselves at Christchurch Women’s Hospital.  Then our world really turned upside down.  You kind of know it is not going to be good when you are seen by a gynae-oncologist and they tell you that they only deal with rare, unique and difficult cases and that as a pregnant lady I fell into all three categories. It turns out that the colcoscopy had shown a high likelihood of carcinoma.  Carcinoma.  That word.  Gah!

A few weeks later I had my first operation, a cone biopsy.  A relatively minor procedure normally but due to my pregnant status and an associated danger of miscarriage I had one night in hospital. The operation went well, I still carried our baby.

The results came back one week later confirming that I had cancer.  The rarer of the two forms of cervical cancer.  I vomited.  The only time during my pregnancy that I did!

We were presented with three options. Option 1 – abort and have a radical hysterectomy; Option 2 – have the pelvic lymph nodes removed and see if the cancer had spread before making any other decision; Option 3 – do nothing and let nature take its course.

We chose Option 2.  Four weeks later I went in for my second operation. This is a time I would rather wipe from my memory.  Hellish describes it perfectly well.  I had no idea that abdominal surgery could be so excruciatingly painful or debilitating or how quickly I would master the gynae shuffle as a way of ‘walking’.  My lowest point was sitting on the disabled bench in the shower whilst a nurse soaped me down.  My god, I thought – it’s come to this – someone I don’t know is washing me because I can’t even stand up long enough to have a shower.  Strange things began to amuse me, like the long smiling low wound that was held together with staples.  Frankenmonster.  My recovery from that operation was long and painful.  With a growing belly the pressure on the wound was uncomfortable to say the least.  Paracetamol became my best friend.

Our best news came about a week later – the lymph nodes were clear – there was hope.  All I had to do was keep on carrying our baby.

We had a few weeks of quiet before the next round…  this time we were introduced to the obstetricians and a team was put together to deal with my progressing pregnancy.  The decision was made to deliver our baby almost two months early and to do a radical hysterectomy at the same time.  If possible my ovaries would be left so that I didn’t have a sudden onset menopause!  The date was set for Tuesday 27th May.  We were given a tour of the NICU and met key people who would be involved.  We were allocated a Social Worker and were booked in to Ra Nui House for our stay once our baby was delivered.

On Saturday 24th May we drove to Christchurch – our normal route was blocked by a landslip so we had to travel a longer route.  Some 8 hours later we reached Christchurch and headed straight to the Maternity Unit for the first of two steroid injections that I needed to help bring on our baby’s lungs.

On the morning of Tuesday 27th May I got up early, showered and remembered not to eat or drink anything.  By 7am we were at Christchurch Women’s Hospital.  By then most faces in the gynae and obstetric departments were familiar.  The whole procedure of rolling on those very fetching surgical stockings seemed normal.  The most striking thing I remember of that morning was how soothed I felt in the knowledge that one of the anaesthetists had been with me on a previous operation!

The operating theatre was full.  People made introductions.  I was kept awake as long as possible.  A spinal injection was administered and my lower body went numb; catheter inserted; general anaesthetic and I was off into dream land.

I gave birth without giving birth!  A strange knowledge.  I have no concept of what giving birth means because I was asleep through the whole thing!

I came round with a very long vertical wound, some strange pain relieving items and my husband sitting patiently by my side with a photograph.  A photograph of our son.

That evening one of the gynae nurses asked if I would like to try and get up to the NICU.  She was happy to push me in a wheel chair.  I did it.  I was determined.  I may not have known which one he was but nearly twelve hours after he was delivered I met him.  All tiny and snuggled in his incubator with breathing apparatus on.  Our precious boy – Angus. So began the next step of the journey, the NICU chapter.

My husband and I soon fell into a routine of spending as much time as possible up in the NICU.  With all my surgery I was having trouble producing milk and we were very grateful to be able to use the milk donor service that had recently started.  We both felt that given the circumstances it was the best start we could give our son; donor milk for the first week of his life on the outside. 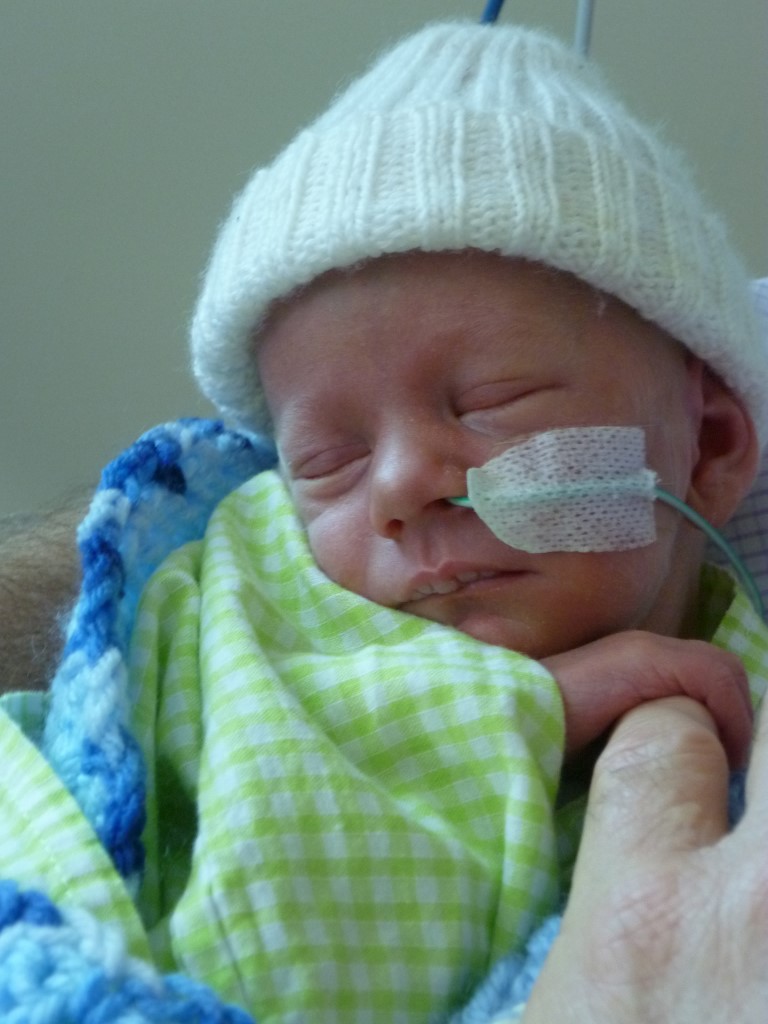 You soon become used to the various noises of a NICU – incubator sounds, pumping machines, hushed whispers, the occasional crying of baby or parent, the click of a camera. You also become used to the routines – helping to do your babies cares, expressing milk, cleaning bottles in the milk room, remembering to eat and drink and sleep when you can.  I had never changed a nappy before and had to be taught how to do it by one of the Nurses.  I soon realised that this was a manoeuvre that had to be done quickly and purposefully after I whipped off the first nappy, was too slow to get our son cleaned up and a new nappy on before he promptly pooped throughout the incubator.  I was mortified.

Angus lost a lot of weight in his first week, but he gradually began to make progress – after all, he was a healthy baby, it was my circumstances that had necessitated the need for him to be delivered prematurely.

A week after my surgery we were given the news that they had found some residual cancer cells but all had been removed as part of the radical hysterectomy and I would not require Chemotherapy or Radiotherapy.  I think we gave the longest sighs of relief in history!  When my staples were removed I looked down at my blancmange belly and realised that the wounds made the shape of an anchor.  For a while I considered having them tattooed as an anchor or having a zip tattooed up my vertical scar.

Words cannot really describe how utterly amazing the staff were and that includes all the staff involved with NICU.  The cheery receptionists, the paediatricians, the lactation consultant, the Nurses and orderlies.  In our experience they all went above and beyond – helping not only with a premature baby but a new mum suddenly suffering with engorged breasts (how painful) and someone who had had cancer surgery.

Angus was in the NICU for 4 weeks before we were repatriated by Air Ambulance to the Coast. We spent a further 3 weeks in hospital to sort out feeding issues before we finally got home 7 weeks after he was born. 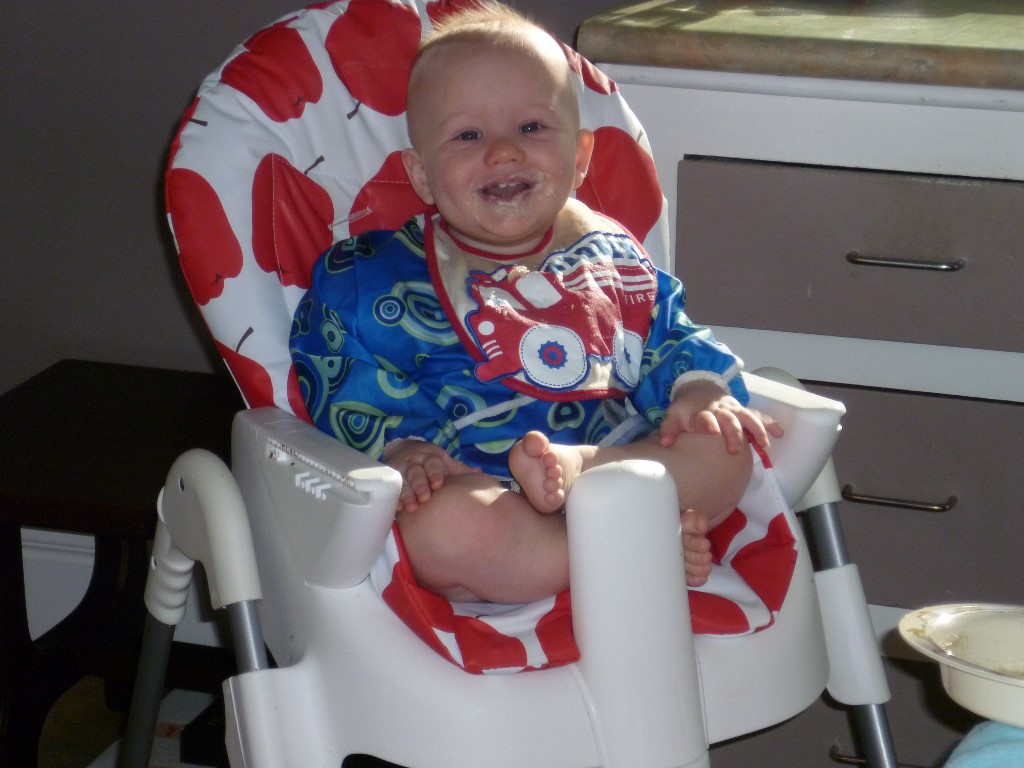 Angus is now 15 months old and thriving.  He brings such joy to our lives and we are exceptionally grateful that we have him.  If we hadn’t conceived him I wouldn’t have had a cervical smear and the cancer would not have been detected and our story could have had a very different ending.

I have 3 monthly check ups and thankfully remain all clear.  When we go for the check-ups we also pop up in the lift to the NICU and share our wonderful son and the progress he is making.