Steven George Zambazos “Stevie Wonder” was born on 21 May 2010 at 5.47pm weighing 900gms. Steven spent nine months in the Wellington NICU and two months in Palmerston North Hospital.  When he was born he was perfect in every way except for his “crap” lungs. My waters had broken at 15 weeks so Steven really had no chance of developing his lungs.

My pregnancy was difficult, with bleeding from five weeks due to a sub chorionic hematoma and I continued to bleed all the way through to the day I delivered Steven. The bleeding weakened the lining and at 15 weeks my waters broke (I was unaware of this at the time as I was also experiencing a heavy bleed out from the clot and also thought perhaps I was having a bit of bladder weakness – second child).

It wasn’t until my 20 week scan that I discovered everything was going to change and even then I didn’t realise the seriousness of the situation.  The technician just said “You appear to have very little fluid around your baby” and I did think it strange that when I went home to show my husband the ultrasound DVD we only saw photos of my placenta (waste of $50 I thought!). I got a phone call from my doctor half an hour later and he said I needed to contact my midwife immediately, which I did and when I spoke with her she told me she was going to talk to an obstetrician at the hospital. Half an hour later I had an appointment at the hospital for the next day. I had a very detailed ultrasound done and suddenly I found out the cold hard facts that here I was at 20 weeks, my waters had broken and that my baby had only a 5% chance of survival on delivery.  I was seen by the emergency care team for full examination. Everything changed – while not admitted to hospital I was on bed rest and had to stop work. I was given a referral to Wellington to be seen in two weeks time if I didn’t go into labour. I was told nothing could be done for my baby if he did come early and that was why I was being referred to Wellington because if anybody could save my baby it would be Wellington.

After a very long and scary two weeks, I went to Wellington and had another very detailed ultrasound and was told my baby was 500gms, had a very strong heart and was growing very well.  The doctor told me “Your baby is strong and healthy, we need to give him a chance”.  He could see some shape around the abdomen which indicated some lung development but he warned me it would be very little.  I was told Steven would grow very happily inside of me, he didn’t need to breathe air inside, his battle would start as soon as he was born.

I was admitted to Wellington Hospital at 23 weeks, I had to leave my little two year old behind in Palmerston North in the care of his father and uncle as well as an awesome caregiver who made my leaving a little easier.  But that is something you block out and during this time you retreat inside of your head and live each day, hour by hour.

When the lack of fluid was first picked up at 20 weeks, Steven had about 3cm of fluid around his body.  When seen in Wellington two weeks later this was only 2cm.  At 26 weeks he had three pockets of fluid.

The main issue I had was the high risk of infection and that this would bring on labour so I was constantly been monitored for infection. My first scare came at 23 weeks when I st 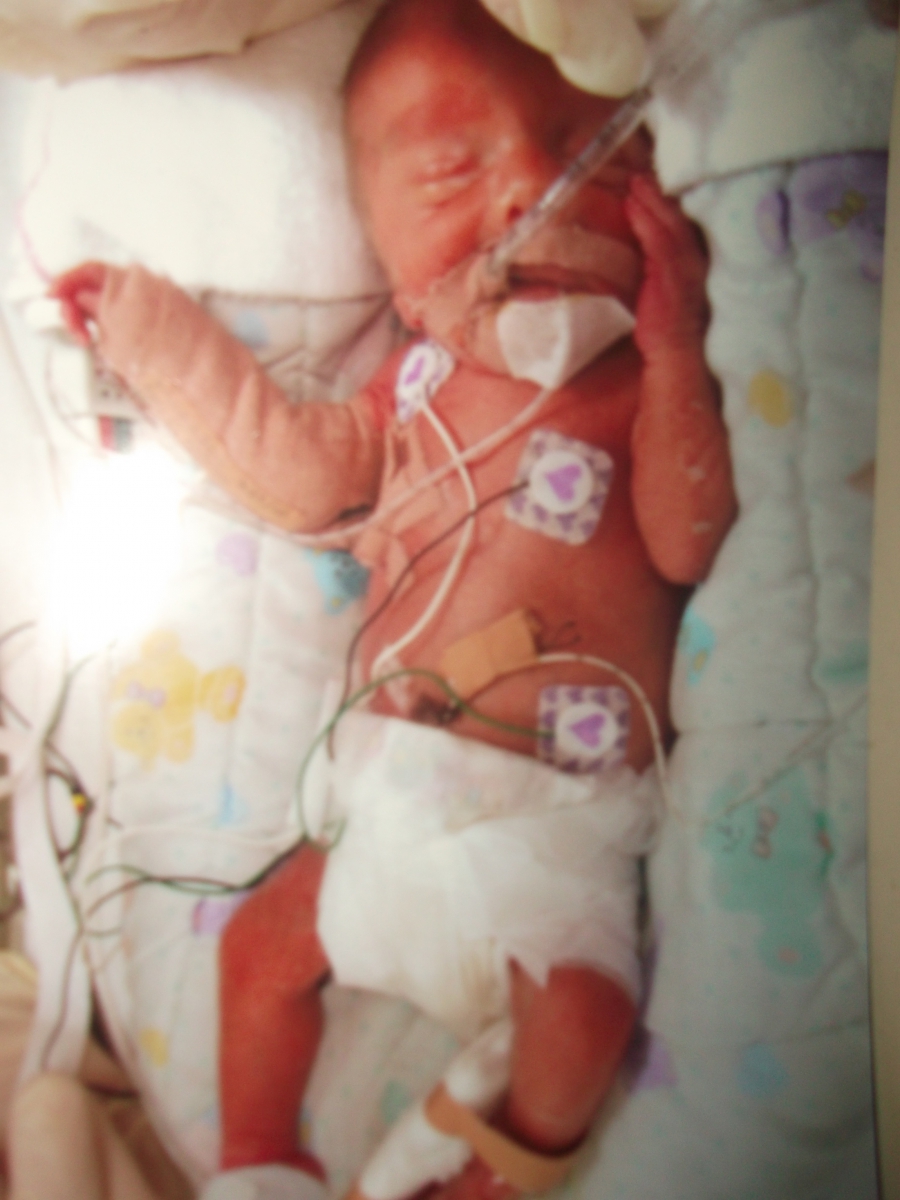 arted having labour pains.  I was given steroids and antibiotics and after a couple of scary hours everything settled down again. I got to meet the team from the neonatal unit and was taken step by step through the process. I went and visited the neonatal ward with my parents when I was 23 weeks and four days, it was a hard visit. It hit home that if my baby made it he would be in this scary place of monitors, beeps, alarms and closed incubators.

Steven arrived at 26 weeks, due to infection.  He was delivered by caesarean as he was too delicate to survive a natural delivery.  I was pumped full of drugs for me and drugs for Steven.  I had no idea that it would take as long as it would for them to remove Steven. Very carefully they remove Steven leg by leg, arm by arm and finally his head. I didn’t get to see Steven as he was whipped away to the corner where specialists worked on him.  I saw a tiny fragment of arm as he was wheeled away, wrapped up and so tiny.  There was only a five percent chance of Steven surviving on delivery and this didn’t increase much over the next five months.

Steven spent the first four and a half weeks of his life on a ventilator.  My first hold came at four and a bit weeks and it was the hold that had to happen.  I was unaware of it at the time and only when I look at photos do I see how sick and near death he was.   The decision was made that I needed to hold him before it was too late and before knowing how bad it was.  It was the scariest thing I have ever had to do. The preparation that went into this hold started in the morning and I knew I was holding him at two o’clock in the afternoon. The staff were brilliant and never showed me how serious this whole cuddle was.  It took so much just to get one tiny little boy out of his incubator and into my arms. He had to be held face up because of the ventilator and there were so many tubes and wires.  It was a magical moment and made up for the events that took place the next day.

The next day Steven developed a major leak, leaking more oxygen out than in.  It was very serious and when the curtains were pulled around the incubator and I was asked if I wanted to get Steven baptised, it suddenly hit me that this was looking pretty ominous.  I was asked to leave the room while they tried ventilating him on a larger tube (this is not something any parent should witness) and it worked.  The next day he continued to look better and it sunk in how very close we had been to saying goodbye. Much to my surprise the next day I was told they were going to put Steven on CPAP, as he was fighting the ventilator.  He loved CPAP and didn’t go back on the ventilator which was a huge relief but I always knew at the back of my mind this was a possibility. 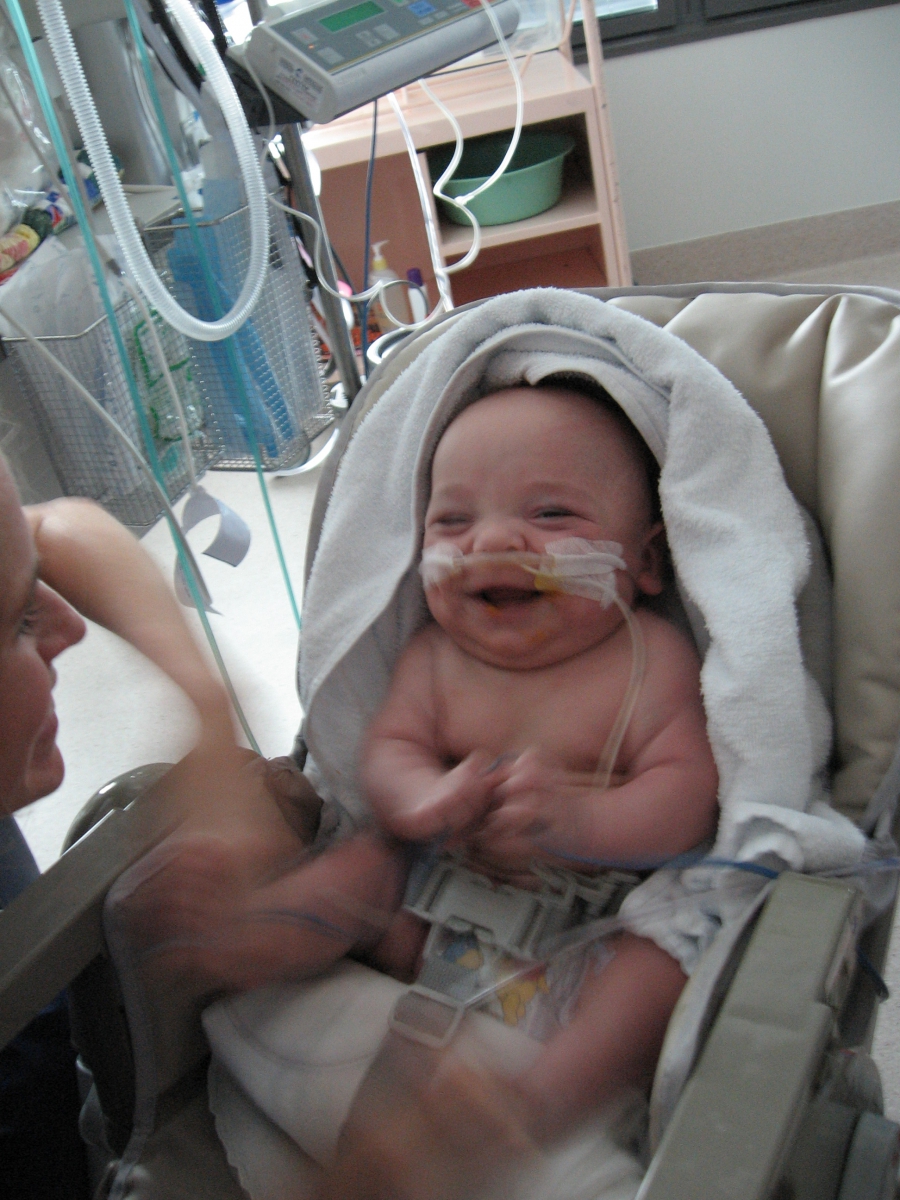 Steven had a wonderful paediatrician, Hashard Patel, who never gave up on Steven and sometimes all we could do was look at each other and shrug our shoulders. Steven soon got the nick name ‘Hashard’s Baby’ and I got quite used to hearing the other specialists saying on the morning rounds “Ah Steven – Hashard’s baby, what can we say” before moving onto the next baby.

Steven’s first five months were a battle for life, we would go for weeks knowing he was “stable, but not in a good place”.  The word stable took on a whole new meaning and was not a word I enjoyed.

At one stage the Palliative Care Team were called in.  Things weren’t looking great, Steven was struggling, his oxygen requirements were not reducing and it really was looking gloomy. That team were the loveliest group of people.  I was able to ask them any questions I needed to and they answered in a very positive supportive way.  Steven developed a cold and amazingly, instead of being “finished off” by this, suddenly decided that things needed to change and for the better. I remember being at a meeting with Steven’s team and the Palliative Team doctor was present and she said how lovely it was to be at a meeting to say “You don’t need us anymore”.

Just before Steven made the turn for the better and it looked like we were preparing for his death, I made the decision to return back to Palmerston North – my two year old needed me to come home and I needed to return to work for my own mental state.  I knew he would be with wonderful people and so started travelling to Wellington a couple of times a week. The hospital volunteer organisation set up a cuddle aunt for Steven, a lovely lady who would visit him daily for a cuddle and special one on one time.

Steven is now four years old.  He stopped being fed by NGT at one year, three months and came off oxygen at one year, eight months. He’s walking, running, jumping, hopping, dan 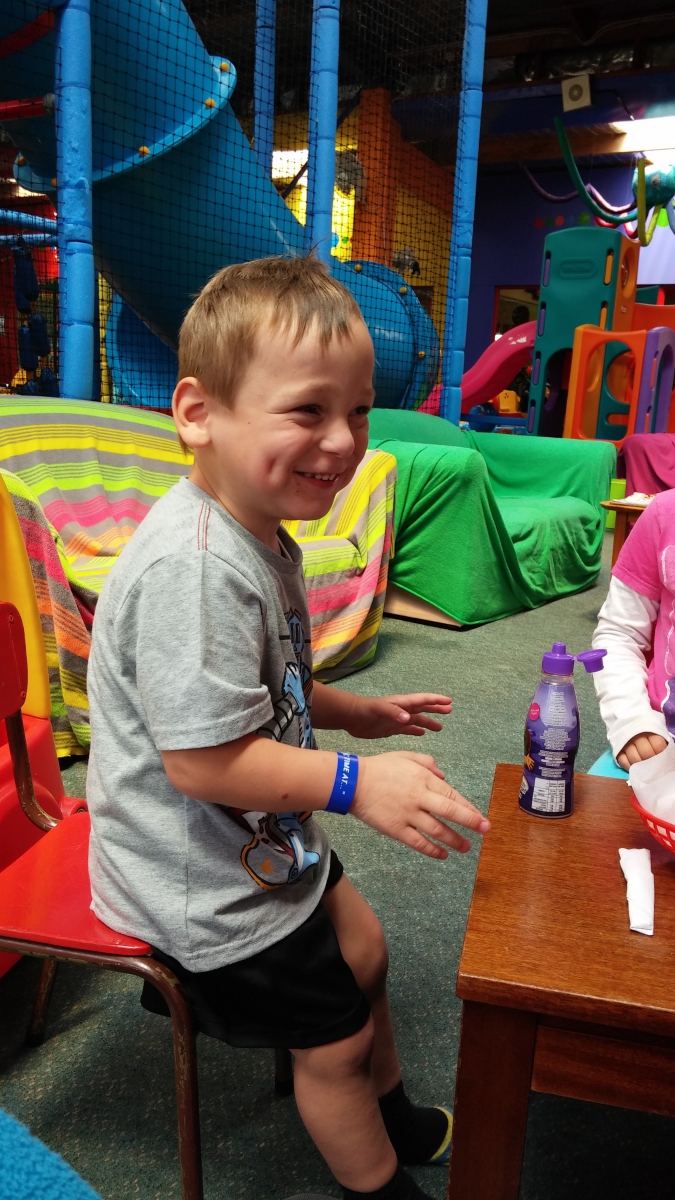 cing, climbing, doing all the things he should be. His developmental delays are due to the fact he spent the first 11 months of his life in hospital as a sick boy whose body was just trying to breathe and eat.

He has some language delays, cognitively where he should be for his age but not a clear speaker, and it is thought he has cortical visual impairment (when the message from the eyes to the brain isn’t interpreted correctly) so his vision is poor, but you would never guess.  Both of these things can be worked on, and Steven is such a great problem solver he just works his way around the problem.

My time in Wellington was not exactly a holiday but it was a most amazing experience, one I will always cherish. While the bad times are acknowledged, I only have positive thoughts about my time there with Steven and that is due to all the amazing people who cared for my son.

Some of the most wonderful people I have met in my life work in the Wellington NICU.  Steven was their baby and the pride and care they took with him was amazing. I have beautiful photos and memories of Steven and his nursing team.  I never felt Steven was alone when I wasn’t there because he had his friends.

One of the hardest things I found during my journey was looking to the future and staying hopeful, I lived day by day, hour by hour. I could never imagine my child wearing clothes, living at home, running, jumping, breathing independently – this hope came from other people who believed for me, while I struggled to get a grip on the traumas I was experiencing. It was lovely having people saying all the positive things that I was struggling to believe in and I knew that while I struggled with these, I had a baby surrounded by people who strongly believed in him.

Steven made it to where he is today because he loves people and people love him. Yes he is strong willed, determined and he is a miracle – “a God’s gift”.  But while it was medicine keeping him alive, it was people that made Steven want to live.  I truly believe Steven survived because he had people around him all the time who cared and cherished him and it was his desire to be with people that kept him here with us.