One kilometre for each day…

One kilometre for each day… A father, supported by his family, gives back

In December 2011, Craig and Elizabeth welcomed their daughter Alexis into the world. Alexis was born only 5 weeks early but with extremely rare complications. As a result she required 42 days of care in the Auckland Neonatal Intensive Care Unit (NICU).

Like many parents who go through a neonatal experience, they wanted to give back to acknowledge the support they had received. Craig decided to run the 2013 Auckland Marathon as a fundraiser – with the 42 kilometre distance very symbolic, as he ran 1km for each of the 42 days baby Alexis was in Auckland NICU. 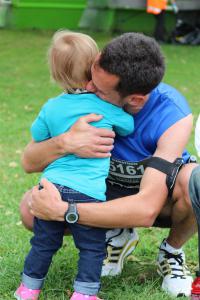 Craig set a target of initially $1000; however this was quickly exceeded. So, the new goal was $2,000, with the final fundraising effort totalling a fantastic $2,685! A super effort and funds like this really do make a difference. They help The Little Miracles Trust to fund a range of support services such as information packs, staff training, and other support services.

Gone are the days of keeping a list of pledges and then chasing up after the event. For fundraising, Craig used www.fundraiseonline.co.nz. Sites such as this and www.givealittle.co.nz make the process very easy as they provide donators confidence of security, allow for images and also show the details of donations made.

Craig, The Little Miracles Trust thanks and salutes you for a great effort.

A word from Craig:
Having spent dawn until dusk each day at Auckland NICU in the summer of Dec 2011/12 watching our baby in an incubator, it was only upon reflection how much positive support we received. Watching other parents and families cycle in and out of the NICU it was clearly evident we weren’t the only ones in need of support and a helping hand to deal with the fastball we had been given.

I decided to make a commitment and run the 2013 Auckland marathon as a ‘thankyou’ to The Little Miracles Trust and also as an awareness campaign to help promote the great work they do. The marathon commitment wasn’t easy – we just had another baby girl and with 18 weeks training involved it was a tough endeavour to complete the long hours of running leaving mum at home with an 18 month old and a relatively newborn child. A big thanks to my wife Elizabeth for letting me get out and hit the pavement!

I completed the marathon in 3 hours 47 mins. Crossing the finish line and hugging my baby girl Alexis was the greatest feeling. Knowing we are helping other families deal with the tough times of hospitalised babies made the effort worthwhile. Once again, a big thankyou to The Little Miracles Trust.