As told by Mum, Pip.

“Your baby is measuring approximately 500grams and will be delivered in the next 48 hours”….. 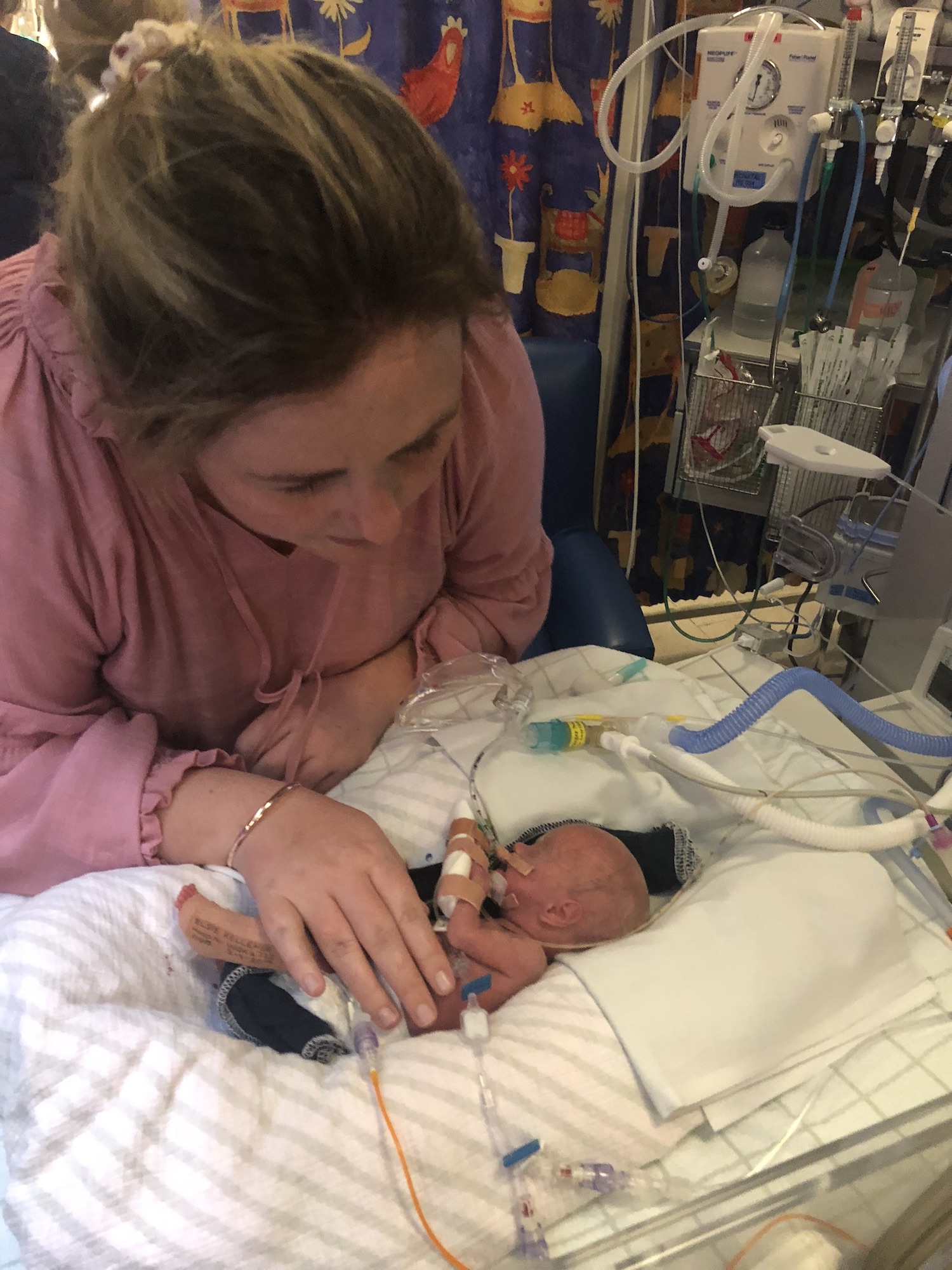 Due to severe Pre-Eclampsia, our baby needed to be born urgently, to save not only her but also myself. We were flown from Palmerston North Hospital to Wellington Hospital by the amazing Life Flight team and were then told we would be delivering our baby very soon. We were scared, we had no idea what was about to happen or how our lives would change forever – especially in the next several months.

I was sick, really sick! Maybe in denial but I definitely had no idea how sick I truly was. It became clearer when Doctors started mentioning the words “seizure, stroke or maternal death” if the placenta and baby were not removed urgently.  We were told that the focus was to save me first and then to try save our unborn baby which was awful to hear.

The Doctors and medical team went on to reassure us that it was possible for our wee, underdeveloped baby to survive and thrive. It would be a rollercoaster, a long journey, but we could get there. We clung on to any hope we could. Nothing was certain. My Husband and I were told that when our baby was born, to take it hour by hour. Anything could change in an instant but they would do everything possible to save our tiny baby.

After loads of tests and administered medication the team at Wellington Hospital decided it was time for our baby to be delivered as the risk to my health had become too serious. I was beginning to shake uncontrollably and had been given the highest amount of medication possible to control this. I was on the verge of having a seizure. I was extremely swollen and my body was being poisoned from the placenta connecting me to my baby. 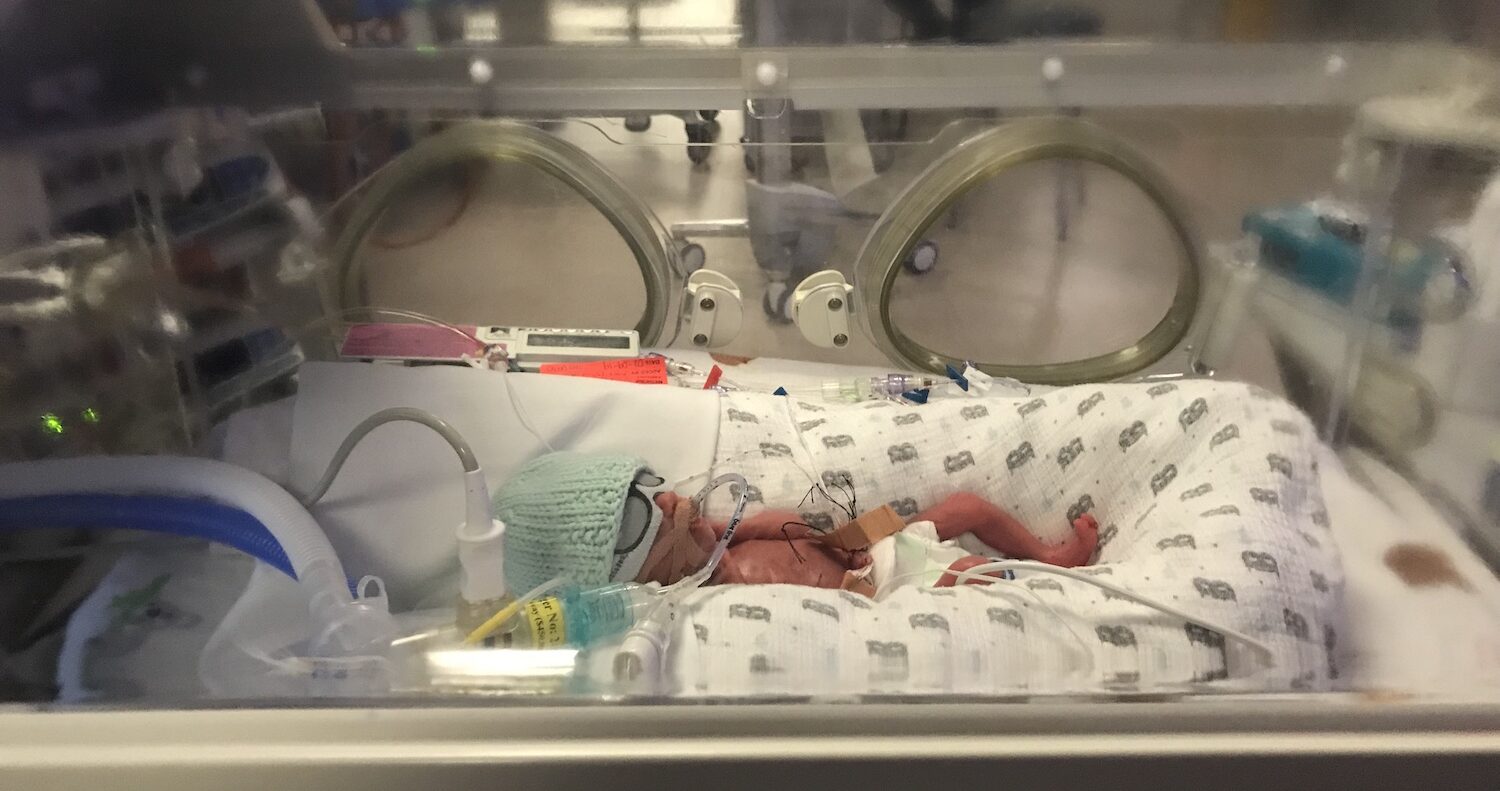 An emergency classical caesarean section was how our wee darling entered the world. A classical c-section is where they cut your womb vertically instead of horizontally as baby would be too little to retrieve from a standard horizontal incision. A future complication from this type of caesarean is that the mother will never be able to have a natural (vaginal) birth with any other future pregnancies.

We hadn’t known the sex of our baby, we had wanted a surprise. Our tiny 465gram baby born at 24+5 weeks gestation was a girl. We wanted to be excited, to celebrate – but we didn’t know if it was a celebration, we had no idea if our wee girl would survive. Our Elsie was held up and shown to us for a brief 2 seconds and then taken away to be immediately put on oxygen support, it took several attempts by different Doctors for her to finally be successfully intubated and become stable on the ventilator. I had no idea that the first time I would hold her in my arms would be 28 days later.

Seeing Elsie for the first time (10 hours after birth) was extremely daunting. She was minuscule in size, she had translucent skin, fused closed eyes and a fluffy, white fur coating her body. We had no idea what to expect – we weren’t even sure if babies could survive being born at this weight or gestation. Was it even possible? The Doctors said it was. Were they just being positive? Softening the blow? We didn’t know. What long term effects could there be? We could only imagine the worst.

We were suddenly introduced to this crazy, new, world of Neonatal Intensive Care which would unknowingly become our new home, our new normal, our whole world for the following months to come. This strange new normal where you had to leave your tiny baby each night in the care of others, not knowing if she would be alive when you returned in the morning, there was always the fear that you might receive the dreaded phone call in the night from the NICU team that you needed to come over immediately.

Elsie proved she was a fighter from the beginning, quickly becoming ‘the star of the room’ named by one of the Wellington NICU Senior Nurses. That same nurse had told us that although Elsie was doing amazing there was a ‘Honeymoon period’ from when a micro prem is born for 1-2 weeks and then things can often change dramatically. Day 10 came around and sure enough, Elsie’s honeymoon was over. The dreaded phone call came at 3am from the surgeon asking me to make my way over to the hospital so that I could sign permission for Elsie to have a surgical procedure as she was very ill – thank goodness my Mum was there staying with me at Ronald McDonald House and we trapsed over in our dressing gowns. 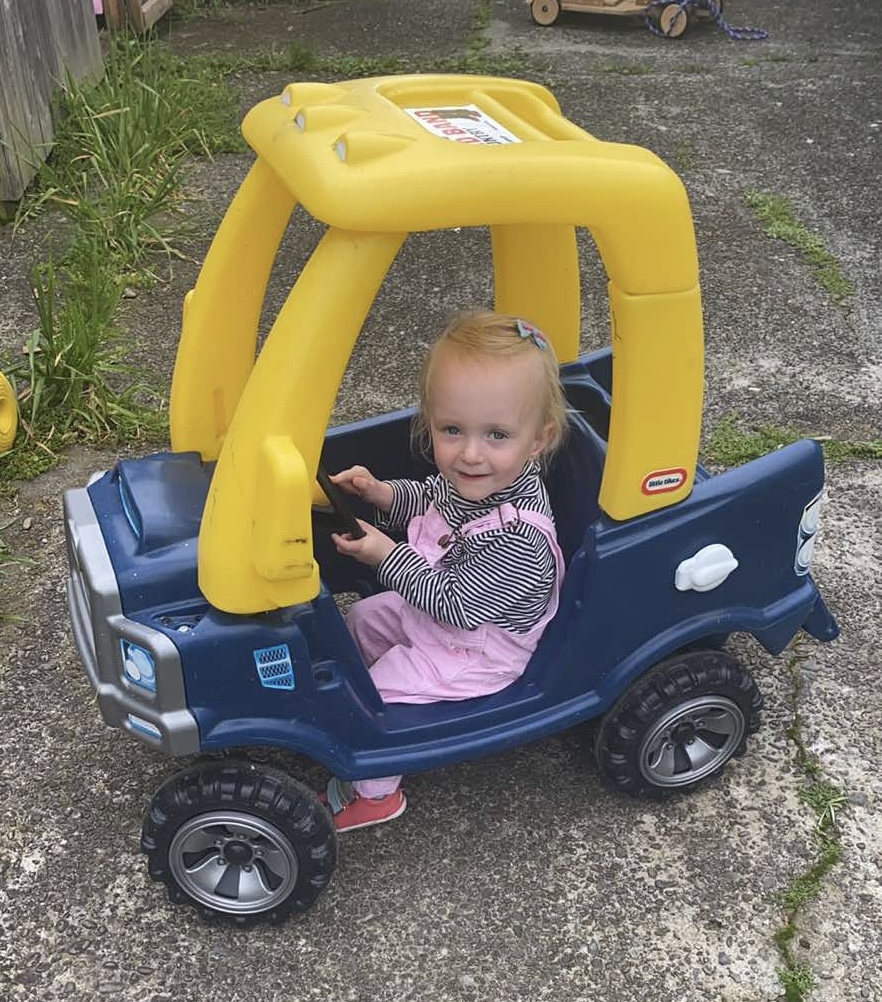 Our darling girl had developed the dreaded disease of Necrotizing Enterocolitis (NEC) which is known among the NICU world as ‘the killer’ of premature babies. Subsequently Elsie improved after her procedure where a tiny drain was put into her stomach but 10 days later went on to become very sick and was sent in for emergency surgery for a laparotomy, ileocecal resection (infected bowel removal) and stoma formation. I remember the surgeon showing us a scale of the risk involved for surgery, Elsie was at the highest point there was possible for risk of not surviving due to her health and her size (600grams on surgery date). The surgeon informed us it would be a “very stormy time”.

Our little fighter, kept on fighting and survived surgery. It took a long time for her to recover, multiple serious infections, loads of transfusions, both blood and platelets. Ventilated for oxygen. The diagnoses just continued to grow, the list was long; NEC, Chronic Lung Disease, Patent ductus arteriosus, Jaundice, Respiratory distress syndrome, Hyperglycemia, Klebsiella pneumoniae, Cellulitis, Retinopathy of prematurity. But Els continued to amaze us and kept on going.

Our journey continued with many bumps along the way.  There were so many lows

Looking back there have been so many positives too..

I definitely recommend introducing yourself to the exhausted Mum you see going back and forward to the expressing room or the Dad next door staring into their babies incubator for hours on end.

Having someone that understands has been priceless.

The one breast feed Elsie had was a very surreal, special moment (Please don’t put pressure on yourself to breastfeed, do what is best for you and you baby).

After 120 days, the time finally came that we were ready to be transferred to Palmerston North Hospital and begin our transition home. There were many mixed emotions about leaving Wellington but we were excited. Could our baby actually be coming home? Did we make it? Did this mean she was going to survive? We definitely had anxieties around this all – even when we did reach home.

Elsie came home 10 days later after being moved to Palmerston North Hospital. She came home on oxygen and remained on that for 6 months. We were lucky, Elsie was like her Mum and Dad and liked her kai and did well with bottle feeding so did not need a feeding tube. Els was still tiny and came home at just over 2KGs. It took time to adjust to being home after so long in hospital, but we got there.

Today as I am writing this, our beautiful, strong, determined girl is out on our Dairy Farm with her Dad moving the cows and riding on the motorbike. Elsie is two years old, she is walking, talking, climbing, dancing, jumping and bossing us (haha). She is absolutely amazing and blows us away each day with the new things she says or does. 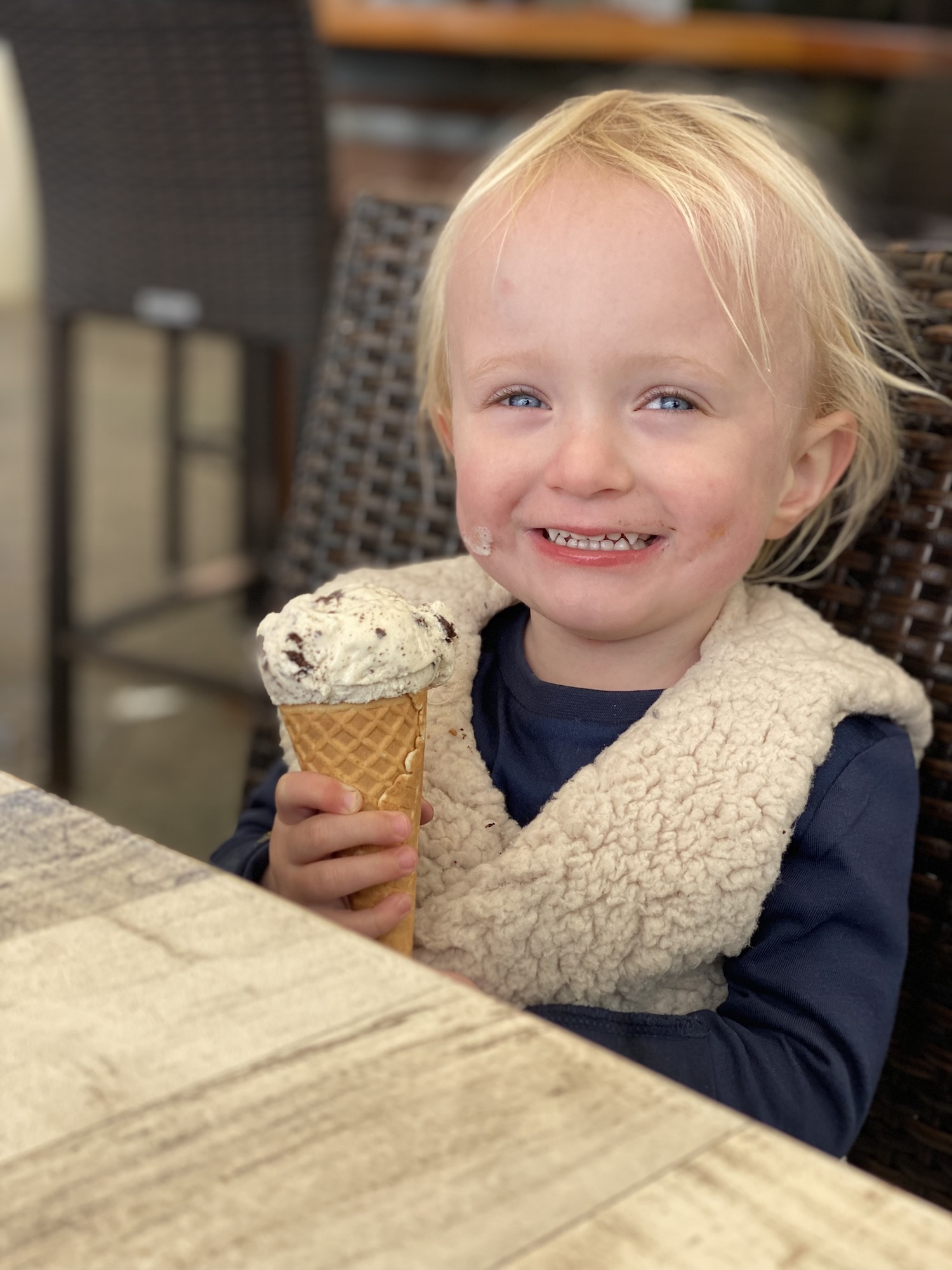 We live a pretty ‘normal’ life now, just with a few extra appointments here and there and some fear of her being immunocompromised – other than that she is a happy, healthy, busy two-year-old.

I remember searching these very same walls of the NICU to find hope, or scrolling the internet looking for a similar tiny birth weight or the same early gestation. We needed hope to get us through this rollercoaster journey. I want to share our story with you all – I hope this too gives you hope and encouragement for your journey ahead, whether you are Mum and Dad or a special Grandparent, Aunty, Uncle, family member or friend I hope we can give you hope. Miracles do happen. These tiny babies are incredible!

We will never forget just how lucky we are that we have our Elsie here at home with us and often think of those who did not get to bring their precious babies home.

Thank you for reading our story