As told by mum, Lisa

We found out we were pregnant with our second baby, Noah on Christmas Day 2018.  After a year of fertility issues (PCOS), we got a positive pregnancy test. We were so excited to be having another baby and for our first child, Liam, to have a little brother or sister.

I developed hypertension very early on in this pregnancy due to a history of hypertension with our first born.  We knew this pregnancy wouldn’t be an easy or straight forward/”normal” pregnancy however I never imagined this journey would be such a difficult and highly emotional rollercoaster.  That’s the only way to describe my experience as Noah’s mum.

At our 20 week scan, the sonographer noticed a very small cyst however told us that it was nothing and not to worry about it.  Those words to this day stick in my mind, because it was far from ok and was definitely something to be worried about.  My instinct told me to pay attention to the size of that cyst.  I remember driving home thinking I should be worried but I don’t know why.

We had a 24 week scan and it was there that I mentioned, hesitantly, that a small cyst was picked up in the 20 week scan and 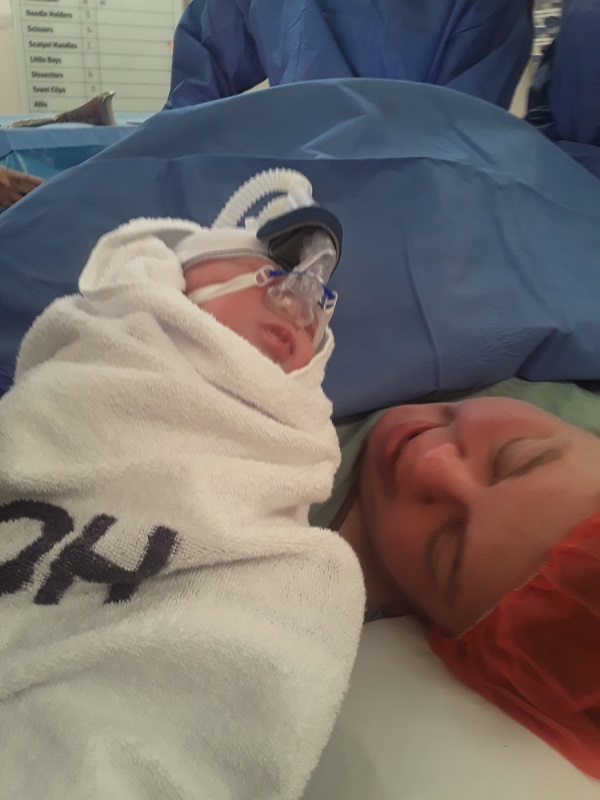 asked if she could she tell us what the differences in size were.  She went away, I knew before she came back that the answer was not good.  She told us that the cyst had tripled in size.  She couldn’t tell us anymore than that.  We were quickly referred back to maternal fetal medicine, Jade and her team.  We had fortnightly and then weekly scans at Wellington hospital.  Every scan showed the cyst was growing viciously and rapidly.  In our meetings they tried to put our minds at ease but all it did was make me more upset of all the unknowns.  Was he going to be ok? What was the cyst doing to his internal organs? When would be the right time to bring him out? Will he survive?

One meeting was different to them all.  It was the day we met Professor Mark Stringer, an amazing pediatric surgeon.  I saw him walking towards the fetal medicine meeting room ahead of us, I knew in that instant he would be the one to save our baby’s life.  I remember him looking at me and saying reassuringly that he had a fair idea what kind of liver cyst this was and that he has experience in removing these surgically.  His reassurance really meant a lot to me.

Tuesday 30th July 2019 I was admitted at Wellington Hospital and had steroid injections to develop our baby’s lungs. During the night I spent where they monitored my insulin levels from the steroids they found that I had developed pre-eclampsia. The night before I was due to have my c-section I worried as to whether I would hear my baby cry or whether he would be breathing when we was born. 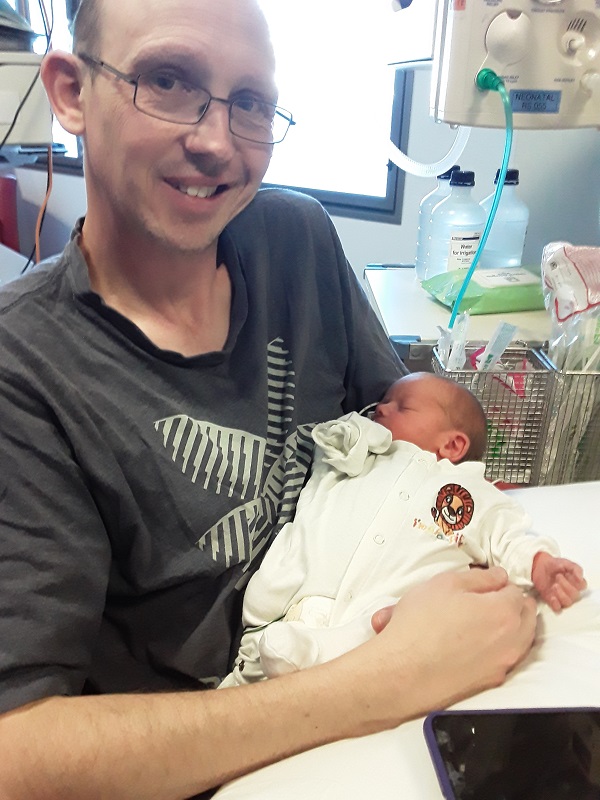 tears running down my face because I thought he is finally here and is making his first sounds on the outside world as he came out crying his head off.  He was given oxygen, weighed and they put a CPAP on him.  All I wanted to do was hold him but I couldn’t.  I was told they would have to rush him into NICU due to possible issues with the cyst pushing on his lungs affecting his breathing, however it was a lot slower and unrushed than I thought.  They brought him up to me and I gave him a kiss on his cheek.  Then I watched as they popped him in his incubator and wheeled him off with my husband following behind.

I couldn’t hold Noah for the first 24 hours of his life.  I didn’t know the rules of NICU.  I didn’t know what I was meant to do, what I could do as a NICU mum.  I was in so much pain at times from the c-section but I knew I had to get down to NICU to see our baby because he needed me.  I got my first cuddles and it was a moment in time that I will never forget, when you meet your baby for the first time.

When Noah was 5 days old, he underwent his first general anesthetic when he had an MRI on the liver and the cyst so we could see exactly where it was situated and what it looked like.  This was the first test that he would survive a general anesthetic.  I was so worried that I may not see him again.  Would he survive this first hurdle?  How would he react to the anesthetic?  What would he be like afterwards?  After months of counselling what I realised was, the MRI was the best chance to see the cyst in all its form.

After he recovered from the MRI, Noah experienced jaundice and was placed under the lights for 24 hours.  We weren’t able to 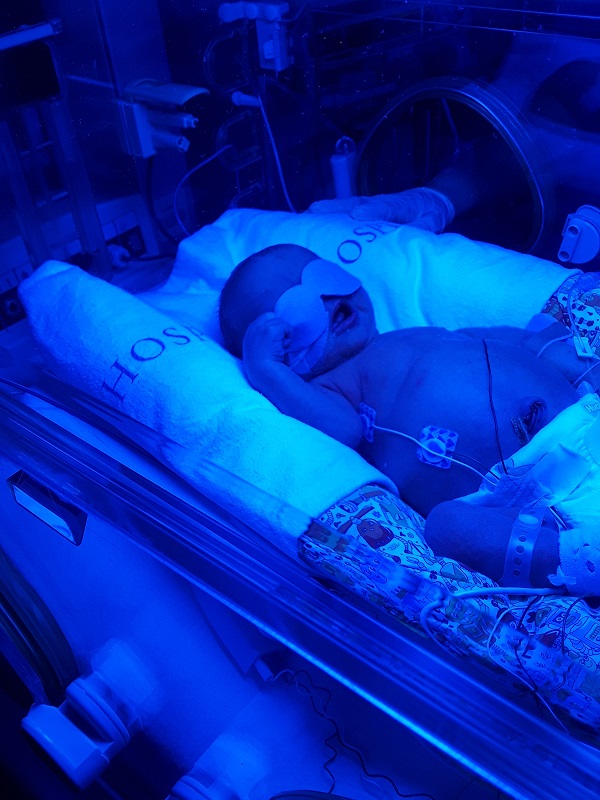 hold him during this time.  We could still do his cares through the holes of the incubator and hold his little hand.

Once I was discharged from hospital I struggled at times as I was torn between home with our 4 year old and in NICU with Noah. At one point I had to stay away from ICU for 5 days as I came down with a nasty throat infection and was on antibiotics.  Richard, my husband, went in to visit and brought home a little onesie Noah had worn so I could smell it and to help with my milk pumping.  It was the longest 5 days of my life not seeing Noah, just seeing videos and photos of him.

At 4 weeks old Noah was 4.3kg and underwent his surgery.  It is honestly the hardest thing for a parent to ever do is have an anesthetist talk about the high risks involved in the surgery and then to sign the paperwork and hand over your baby to the team.  Cuddle him for the last time not knowing if you would get the chance again.  To walk down as far as you are allowed to go, and watch as they roll him away, wondering if you will see your baby alive again is the most heartbreaking moment, one I will never forget in my lifetime. 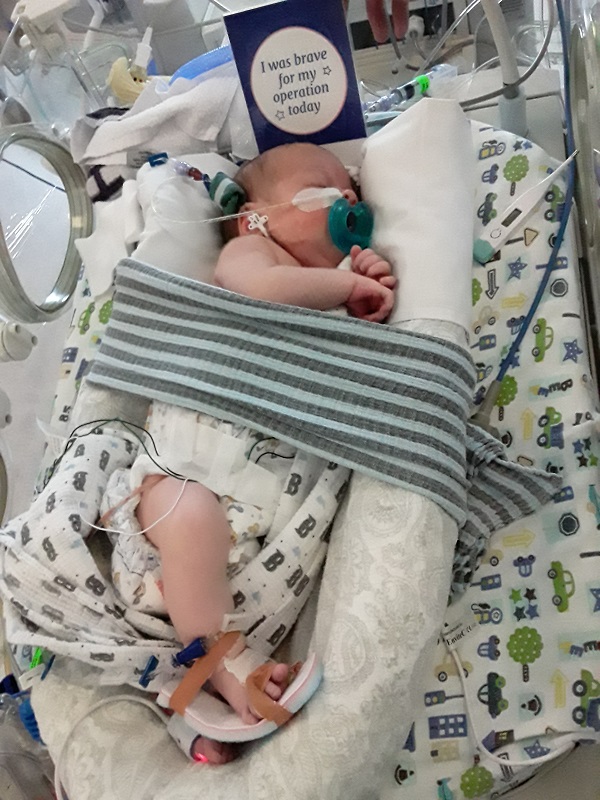 cyst before removing it in its entirety.  We got the call early afternoon to say surgery went very well and that he had removed the entire cyst, it was such a relief to get that call.  We weren’t out of the woods however, there was a little ray of hope that he had survived!  He stayed a further 13 days in hospital, 2 days on morphine and he was ventilated before coming off morphine and breathing on his own.  He surprised not only the staff but us as well, with how strong and determined he was to pull through.  Each day taking a drain out or removing a main central line in his neck, to being able to feed on his own again.  It was all part of the process that we watched closely through those days until one day we were in Room A and we were able to take him home.

Noah is very special to us and we are very grateful to have him in our family.  He is now 15 months old, has just began walking on his own.  He is a young toddler full of life, not timid or shy of anything.  You would never believe the start he has had to life.  It’s nice to watch our boys play and laugh together.  It makes what we went through all the more rewarding.

We are forever grateful to Mr Stringer and all the staff at Wellington NICU for being involved in Noah’s pre and post op care and for saving his life.

To those that are living day to day in the Neonatal Unit I would say this to you, take each minute of every day as it can change in an instant.  Trust the amazing staff, but ask as many questions as you need.  Have a voice for yourself and your baby.  Take time for you as it is a very emotional rollercoaster to ride day in and out.  Ask for help from the small few who will really be there for you.  Trust yourself, you have more strength inside you than you realise. 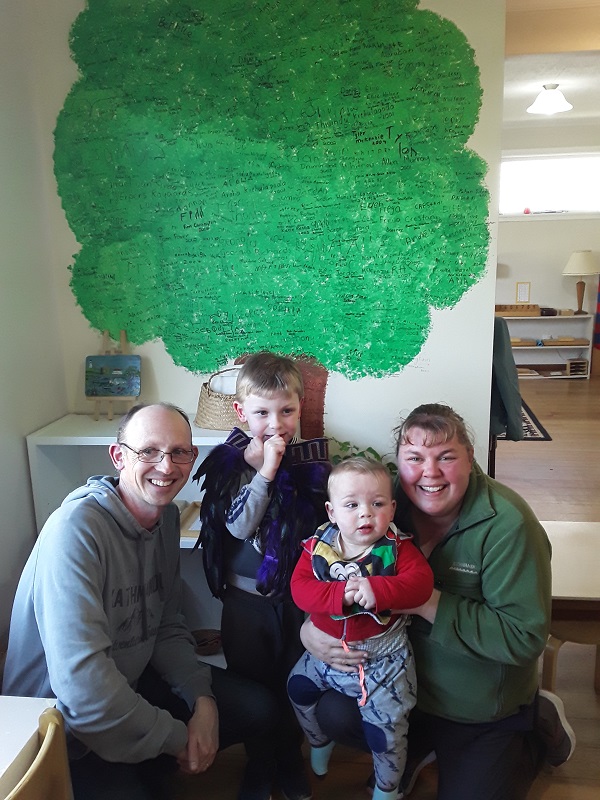 ***Thank you for sharing your journey Lisa ***