In August 2009 we were just settling into our new home in our new town, New Plymouth. My 5 yr old was settling into his new school, my husband to his new job and I being 24 weeks pregnant was just chilling, sorting the house.  After a previous premature labour I was under a specialist, just in case. Everything was going fine.

I went to my scheduled appointment with my midwife and mentioned a small discharge. “Let’s get you checked just to be sure,” she said. Feeling a little anxious but not really worried I lay down to be examined…..then the words that started it all “You are 3cm dilated” and with those words our journey began. I called my husband. He was by my side in an instant. I was given steroids for baby’s lungs and drugs to try and stop the labour. We were both in shock and so scared. How could be go through this again? Then we were told if I did go into labour I would have to be sent to Waikato where they could care for an extreme premmie.

So to Waikato I was flown and my husband and son drove up next day. I was put in a ward with other women all hoping we didn’t go into labour yet. Nothing to do but just wait and hope. “If we can get you to 30 weeks you will be able to go back to New Plymouth,” so that was that. Second night and I felt like I was having braxton hicks, which was what happened last time but this time I knew it could be labour!  They put me on monitor and the instant it was hooked up I knew this was it. They became so much stronger. I text my husband and told him the baby is coming. When the doctor came back and did an internal my fears were confirmed, I was 10 cms!!! 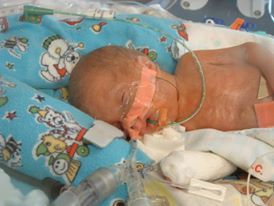 In the early hours of the morning bang on 25 weeks gestation Kaleb Craig was born weighing 858 grams.  It was such a surreal moment. I got one quick glimpse of him before he was whisked away…. 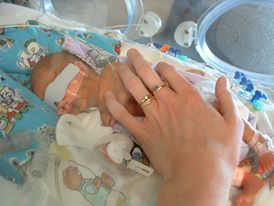 Seeing Kaleb for the first time was so emotional. My baby, this tiny little thing, hooked up to so, so many wires and machines, laying in this plastic incubator and all I could do was look at him, not even touch him!  Could I do this? Did I have the strength? No choice now, I was about to find out just how strong I could be.

The first week ticked along with lots of ups and downs. At 1 week old xrays showed his lungs were not looking too good he was needing a lot of support and oxygen, and he was also battling some kind of infection…. Two days later we found out that the infection was meningitis! I will never forget that meeting with the doctors and how serious, touch and go things really were for our precious baby.

The next week was again filled with ups and downs. One step forward followed by two steps back, we would get use to this as the norm for a NICU journey. Then our next big scare, the meningitis was causing problems with Kaleb’s eye and he had to have surgery. Seeing our tiny baby barely a kilo being wheeled away for surgery was another moment I will never forget…. but it’s also another thing that as this journey continued would become the norm for my new life as a NICU mum to a very sick wee boy.

Kaleb like a trooper came through surgery fine. He would have no sight in that eye but we could cope with that as long as we got to take him home with us.  At 3 weeks he came off the ventilator and onto CPAP. We got to hear him cry and make noises for the very first time…. and that moment made all the bad moments melt away.

At 5 weeks old I got my first cuddle! Wow, what an emotional moment. I had waited so long. The effort and time it took to organise this cuddle with all the wires was crazy but so worth it. I had to try really hard not to cry all over him. A huge high moment….but again was followed by another huge low, Kaleb was now showing too much fluid around his brain and there was uncertainty whether he was having seizures or not. The next day the decision was made to try and remove some of the fluid, so over the next few days the doctors manually drained a small amount of fluid through his fontanelle.

Now things were getting very serious again. The meningitis had caused a blockage in Kaleb’s ventricles stopping the fluid from flowing, causing pressure on his brain. We were about to learn a very big word – hydrocephalus (water on the brain). We would have to be flown to Auckland as Kaleb was going to need neurosurgery. I didn’t think my heart could take much more….how could my little man take much more of this? Again my strength was about to be tested. So at just over a month old Kaleb was flown to Auckland on his first helicopter ride and in the same day underwent the first of what would be many surgeries on his brain. This one was to put in an external drain to try and relieve some of the pressure. The longest wait of my life…waiting until I could go and see him in recovery.

And like the trooper that he is, he came through it fine.  The next few weeks were full of the usual ups and downs I had become accustomed to. At 8 weeks old he finally had his first bath, another emotional moment for me. Those high moments really are what get you through – the first bath, the first time get wearing clothes, graduating from the incubator to a big boy cot (well more like a big fish tank than a cot, hee hee). These moments got me through the bad days and finally at 1 week past his due date he was big enough and well enough for the biggest surgery yet…. he would get a shunt inserted into his brain that would drain the excess fluid away. Again my baby was being wheeled away and all my faith and trust was in the surgeons to bring my baby back to me safe and well.

After the shunt surgery Kaleb was like a different baby. So much more settled and all the bradys and desats stopped. A week later we were on a plane back to New Plymouth. An exciting and terrifying moment for me… I was leaving the safety of the NICU and nurses and doctors that knew my Kaleb so well, it had been our home for the past 11 weeks and we were going to a place that didn’t know us, didn’t know Kaleb and all his issues….. but they were amazing. They made us feel so loved and cared for.

Now we were at the growing and feeding stage, once we had these sorted we would be allowed to go home.  I spent the next two weeks living in the NICU with Kaleb learning how to finally be a ‘proper mum’. Now this was scary. No more nurses telling me what to do. I had to start making decision on his care and that was a huge responsibility, one I wasn’t sure I was ready for but I had no choice.

The day we took Kaleb home was a strange day. Of course I was happy but I was also scared and worried… I had spent the last 4½ months living in three different NICUs with nurses around 24/7.  And now I was taking my baby home where I would be his sole carer 24/7. Again was I ready? Could I do this? Yes I could! I’d be lying if I didn’t say I had my moments, fear, tears and uncertainty but the strength I found I had, that I never knew I had, from surviving those months in the hospital got me through. 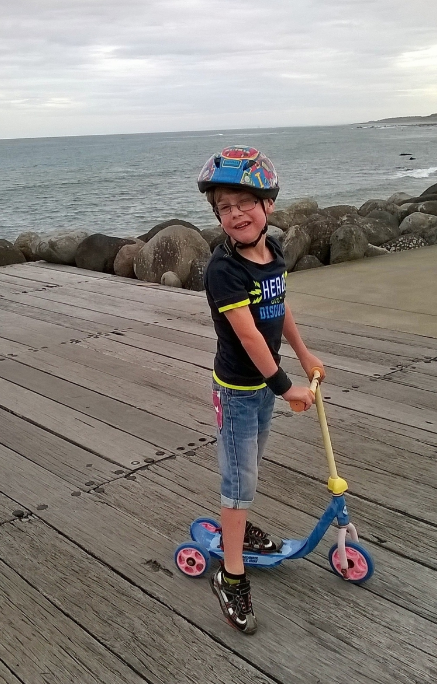 If I could get through that I could do anything.

Yes there were still many ups and downs when we got home but we got through them and now Kaleb is an amazing nearly 7 year old.

Yes he has faced many difficulties, developmental delays, loss of vision in one eye, and the hydro but he is a survivor and he has proven that miracles can happen. For a baby that wasn’t given a great outlook he is here, walking, talking, going to school, learning and making his parents the happiest, proudest parents in the world!

CPAP – Continuous Positive Airway Pressure, air, with or without extra oxygen, given to the infant through small, soft tubes in the nos. The pressure keeps air sacs in the lungs open making it easier for the baby to breathe.
Brady – Bradycardia, a slowing heart rate, generally to less than 80 beats per minute for a newborn baby.
Destats – Desaturation, a decrease in the amount of oxygen in a baby’s red blood cells, tracked by a cardio-respiratory monitor or pulse oxygen machine.

*** Thanks for sharing your story Donna and Kaleb ***
If you would like to discuss sharing the story of your neonatal journey, we’d love to hear from you. Please email info@littlemiraclestrust.org.nz