Imagine if we all gave a little each week?

An example of a young kiwi, his pocket money and teaching about the value of money, saving and thinking of others.
From The Little Miracles Trust and One Percent Collective.

An important aspect for shaping attitudes and behaviours is starting young. Here’s an example of using pocket money to develop thinking about others and valuing saving. You can also hear about it in Connors own words.
View the short video here. https://vimeo.com/152252788

With Connor, we made a purposeful focus on how we gave pocket money. At 5 years old we sat him down and told him that we were going to start giving him pocket money, and it would be $2.50 to start with – this being half his age. Without going over the top, we had always been conscious to talk to him about money, what things cost, and that saving was good. Also, we made it clear that we were lucky to have different choices to others and that Mum and Dad believed in helping out others.

When we introduced pocket money, we were careful to involve him in the process. We didn’t tell him what to do, instead we asked him for his thoughts and involved him in the decision on how to split it between three categories. He arrived at:
$1.00 for Spending
$1.00 for Saving
$0.50 for Charity

We sit down (well, sometimes lie on the floor!) at some stage in the weekend and Connor will write up his pocket money himself. Great practice for both writing and maths. Importantly, it involves him and gives ownership of what he’s doing.

Spending is for anything he wants. While we of course buy him things, when there’s something he will get that his younger sister doesn’t (good conversation on his money, his choice), or something special (it means more) he uses his money.

Saving just keeps climbing, and we haven’t put any rules around spending this (yet). He loves seeing how much money he’s got, and talks about it with pride.

Charity is to give to a good cause of his choice. This gives so much more relevance when we’re giving to a street collector, dropping money in Ronald McDonald House collection box, etc. He uses this for giving extra to a school fundraiser, or we talk about it when we visit somewhere we know is having a collection and he can choose to grab some money. As above, a great conversation starter about feeling good about helping others and also how lucky we are. 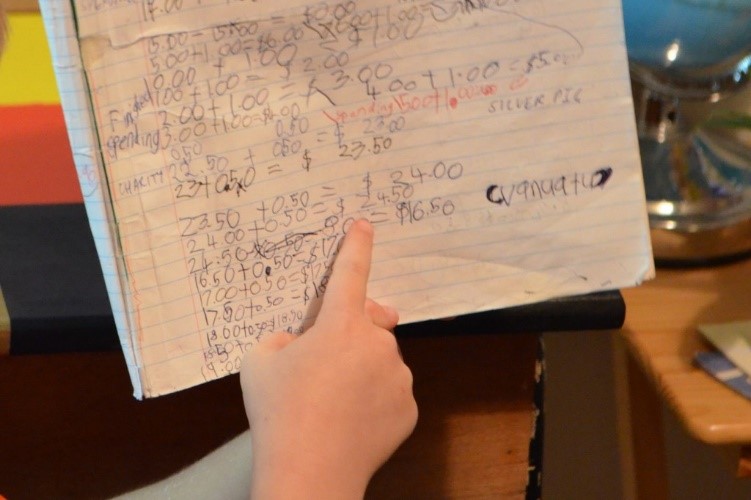 The picture to the right shows Connors workbook, where he records his pocket money each weekend. ‘Silver pig’ is his money box that the charity $ go into! All ‘withdrawals’ are noted as to what cause he gave to so he can remember and be proud of it. In this example, he gave $8.00 to Vanuatu. Not sure why this amount, but again it’s his decision and we leave it to him (rather than doing it for him)..

Founder, Pat Shepherd, says the idea of setting up this charity in 2012 was to inspire New Zealanders with a new way of giving.
“One Percent Collective was born out of an idea to change the way Kiwis give to charities; by encouraging them to donate one percent of their income to help grow smaller New Zealand-based charities. One Percent Collective is all about inspiring generosity and simplifying the notion of regular giving to causes that we really care about.

“For the average Kiwi, one percent is around $10 a week, this amount of money can make a real difference to our six amazing charity partners. We hope to bring in a wealth of regular supporters, so that our charities can spend less time focused on fundraising, and more time achieving real impact and innovation for their wonderful causes,” adds Shepherd.

Since its inception, One Percent Collective has raised over $200,000 through donors’ one percent donations.
The continual giving facilitated by the One Percent Collective, will enable us to free up time and focus our efforts on the thing which matters most: supporting families going through the stress of a neonatal journey.

Our thanks to Dusk
The Little Miracles Trust are privileged to be supported by One Percent Collective who are all about thinking of others and fostering a giving culture. Both The Little Miracles Trust and One Percent Collective are appreciative of the support of Dusk who donated their time to produce this video at the best value price of $0.00.
Check out examples of their other work here: www.dusk.nz/work