Where there are sweets you most certainly get the sours. There were no truer words in 2011 for my family.

At age 36 with two teenagers, having a baby was nowhere in my life plans. But God sometimes has other plans for us. It took me a few weeks to process that I was going to have another little one. When I told my two older children, who were 15 and 14 at the time, I was well on the path of morning sickness. Ashlee (14) was over the moon and Jaydon (15) was shocked at the idea his Mum was having another child.

My morning sickness was day and night and I knew this was different. At thirteen weeks it was confirmed. I was carrying identical twins. We were excited and terrified at the same time, until they said there was a three millimetre size difference. I knew that wasn’t good, but had no idea just how rough this road was going to be.

At sixteen weeks we had Fetal Medicine tell us “Sorry, your babies have a few things wrong”. No words can explain what went through my head and heart. I didn’t really register what they were telling me.

The doctors told us our babies had Twin to Twin Transfusion Syndrome, that their egg didn’t split evenly. Twin 2 was two weeks behind in size, had fused kidneys, no bladder or intestines and would probably die.  We had three choices and two weeks to decide which one to go with:

1. Laser surgery on their placenta to stop the sharing of their blood. This meant a 15% survival rate for Twin 2.
2. Do nothing and just watch. This ran the risk of one baby dying and causing brain damage in the other baby.
3. Cord occlusion of Twin 2. This meant cutting her cord so she died.

What were they thinking? How can they put decisions like that to a parent? I thought those were the darkest days for us. I was wrong.

At eighteen weeks, decision day came and God gave us a miracle. Twin 2 had working kidneys and intestines. What a relief. I didn’t have to choose between my babies. I chose to wait and see what happened.

Twenty weeks came like a sledge hammer. There could be no waiting now. Laser surgery had to be done or I would lose them both. Twin 1’s heart had enlarged, her kidneys were in over drive and my uterus had jumped to full term size. Small contractions had started. It was another blow to our world. I felt so alone, like no one could comprehend the hopelessness and fear I felt. I was trying to help my older children deal with the pain too.

Life was at a low point until after the operation and Twin 2 survived. Relief and joy filled us all. I honestly felt like I had won lotto and the world was colourful again. Twin 1 was doing well and Twin 2 had a bladder and had made an overnight recovery. I named her Hope because our Hope for her was life.

Hope fought until she was 24 weeks gestation. A little piece of me died with her. Hope stayed snuggled up with me until the other baby was born.

At thirty four weeks Twin 1 stopped moving and I had an emergency c-section. I named her Grace because it was by the Grace of God we didn’t lose her too.

Gracie’s medical journey is just as long and complicated and heart breaking as the pregnancy.  She had problems as long as my arm. Meconium peritonitis, a 25cm long and much damaged cord, but her tummy was the most concerning. It was bigger than her head. She was raced from Whangarei to Auckland City Hospital NICU, where she stayed nine weeks, mostly as a level 3 baby. 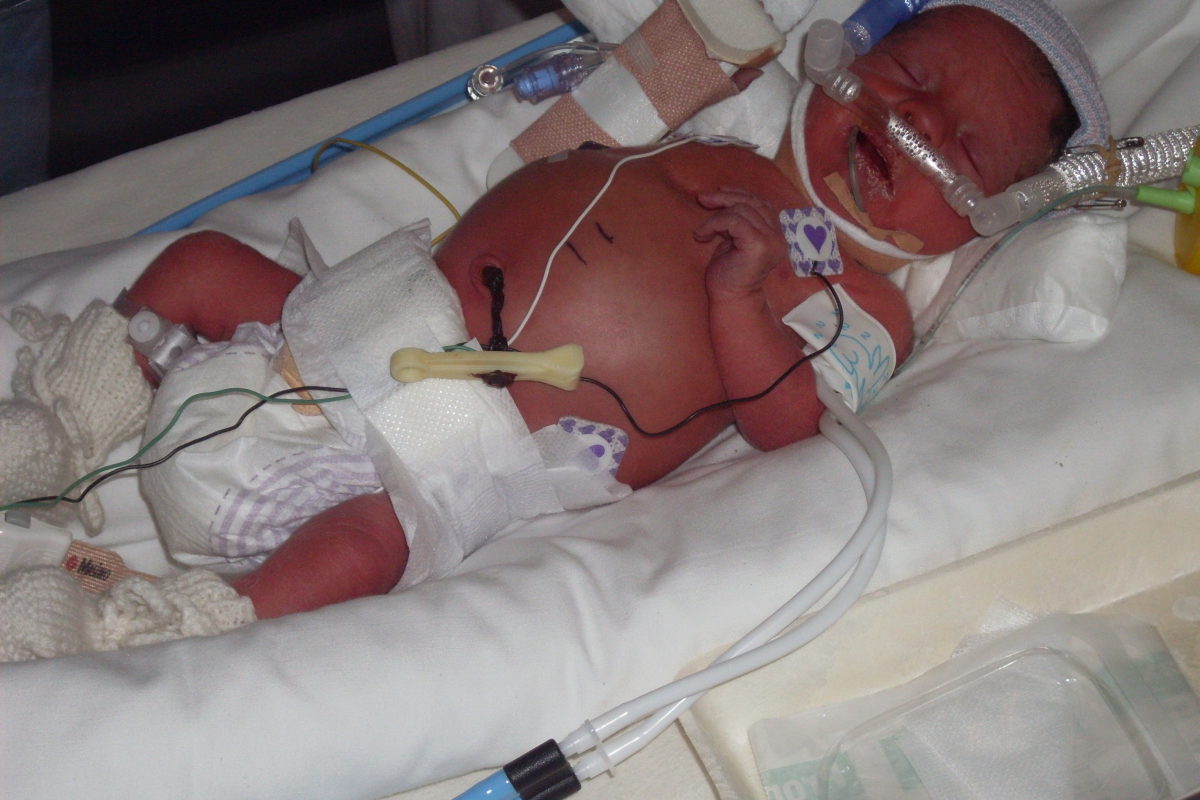 Gracie’s first operation was on day five of her life.  I was told it should take no more than two and half hours but instead took five hours.

I was so afraid to touch her or even cuddle her. My expectations of how the pregnancy, delivery and healthy baby were supposed to go had been blown to smithereens. Grief could not even cover the emotions I was going through and to be so far away from my other children.

Gracie came off the ventilator on day 11 and I got a real cuddle. I cried with just how much joy I felt to do something normal for her. I also got to breast feed for the first time when she was four weeks old, only to have that taken away 48 hours later. This was when her complications started.

Gracie’s IV access was very poor and it seemed she was getting a new line every day or two. Some days she had two or three IV lines put in. Gracie had trouble putting on weight and then her liver started to play up. All up I think she had seven transfusions of one sort or another before being sent to Starship Children’s hospital at nine weeks of age.  Starship became our home for five weeks.

I cannot thank the staff in NICU enough for their support and care. I know at times I must have been an irrational parent but they helped where they could.

Gracie came home 99 days after her birth.   Two years on, I look at this little girl and see a vibrant tenacious girl who loves jumping and showing off. 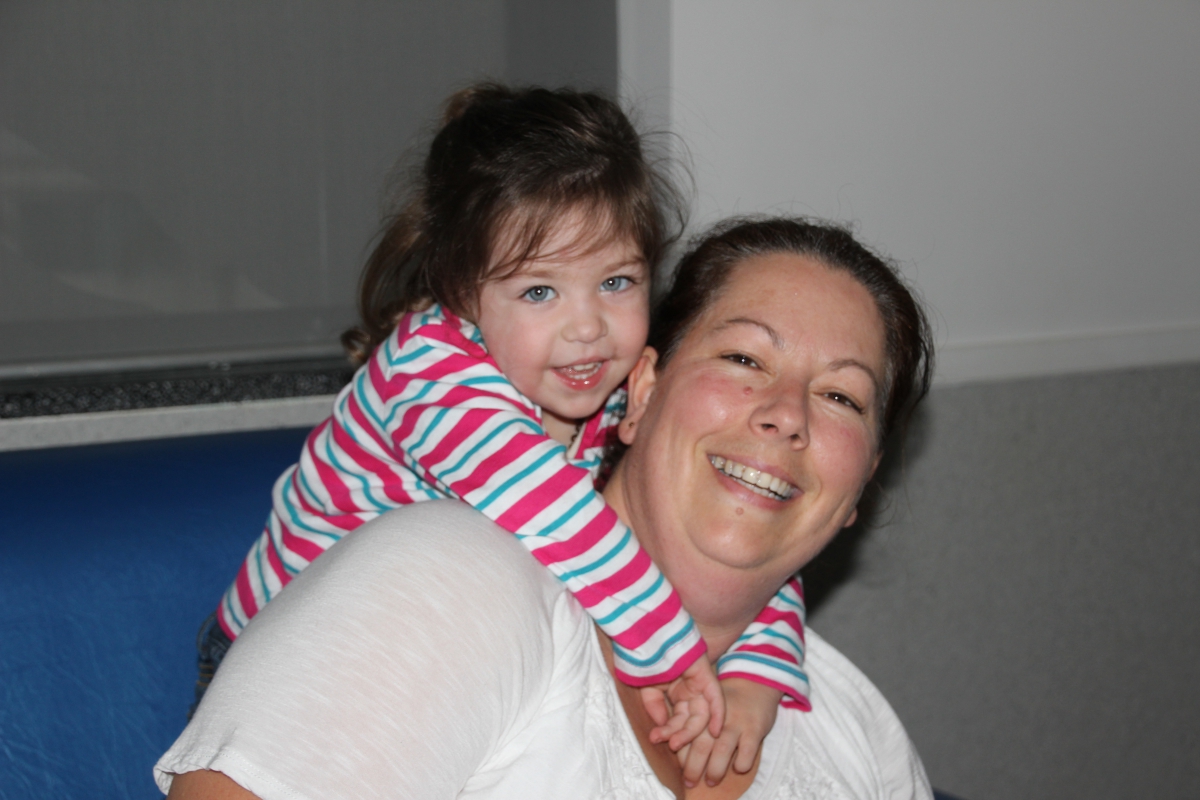 If we had not gone through this hardship, I may not have been able to help others like myself in Whangarei. I may have been close hearted to the need in my own back yard. Now I make scrapbooked journals for families in SCBU, just like I got in NICU. Thank you my darling girls for inspiring me to help make the world a little brighter for others.